13 Billion to One by Randy Rush – Book Review

I was sent a copy of 13 Billion to One by Randy Rush at no charge for my honest review. 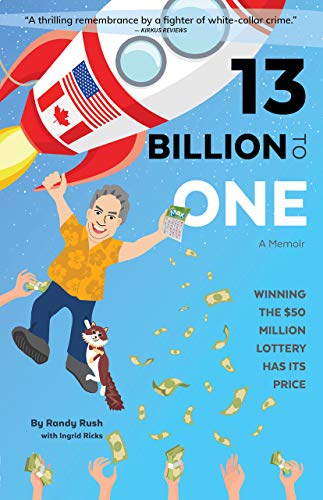 About 13 Billion to One:

As a welfare kid who grew up in the streets, Randy Rush had to fight for everything he got and knew what it was like to struggle. So, when he was suddenly handed $50 million in tax-free money, he vowed to use his new-found wealth to help others. But what he didn’t see coming was Jeremy Crawford.

In his gripping, adrenaline-packed memoir, Rush takes readers on his rocket-fueled journey after a trip to the corner grocer to buy food for his beloved cat, Conway Kitty, leads to the discovery that he has won Canada’s $50 million Lotto Max jackpot.

Soaring on a seemingly endless endorphin high, Rush spends the months following his wintraveling, feeding his passion for rare sports cars, considering charitable causes, and splurging
on friends — paying off their debts and even giving them a free place to stay in million-dollar homes. But his world comes crashing down when he discovers that Dave Crawford, a man he loved like an older brother and had generously provided for, has served him up to his con artist son, Jeremy — who scams Rush out of nearly $5 million.

Reeling from Dave’s betrayal and fueled by the discovery that the Crawfords are serial con artists who have devastated the lives of more than a hundred others, Rush embarks on a mission to take his adversaries down. But as his quest for justice drags on, his festering rage reaches a boiling point and he is faced with a choice: Let the Crawford’s cons destroy him, or re-focus his attention on doing good in the world and enjoying the enormous gift he has been given.

Randy Rush is on a mission to stop white collar crime and other social injustices by exposing them to the world. He recently founded Rantanna Media, a mission-driven publishing and production company, to give victims a voice and raise widespread awareness about the devastating impact of these crimes. Randy is also committed to transforming the lives of children in Africa by providing them the education, love and hope they need to succeed.

He divides his time between Canada and Europe. For more information, visit www.randall-rush.com.

Can you imagine winning a $50 million lottery? I suppose we have IMAGINED it but actually winning it? Yeah – that hardly ever happens. But it did happen to Randy Rush! He found out when he went to the store to buy his cat some cat food. (His cat is named Conway Kitty – how cute is that?) Needless to write, his life changed overnight.

What follows is Randy sharing the excitement of his win and impacts all of that money had on his life. He was determined from the start that we wasn’t going to end up like a lot of lottery winners who end up blowing through their winnings in short order and find themselves left with nothing. He was going to invest wisely and help some friends. Randy was also determined to do some good with his money.

While he was commited to this ideal he found that sometimes his friends were more interested in his money and what it could do for them than in what Randy wanted. One who he considered a very good friend ended up swindling him out of almost $5Million. It was his quest to get his money back that led him to part of his life’s work – finding and bringing white collar criminals to justice.

13 Billion to One was a fast paced if one note read about one man’s experience with sudden, extreme wealth and the impact it has on a life. Even though Mr. Rush covered some of the negatives that can occur when a life altering event occurs it still seemed as if he glossed over the negatives to maintain a positive outlook. I am all for remaining positive but even when describing his overwhelming rage I still felt detached from it rather than drawn into it.

It is a fascinating look at what any of us could consider a dream come true event. And certainly a cautionary tale to keep in mind should any of us be so lucky as to experience such a wonderful event.  One definitely has to love a cat named Conway Kitty too.