20 Page Turning Books from All Genres

Sometimes you just need a really good book to distract you from whatever is going on in either your world or the world in general. For some people that means a thriller, for others it means an involving historical fiction tale. Other times it’s a light and frothy story that is just well written and involving. Whatever you are looking for I have a list of 20+ page turning books to pick from when you need a good book. 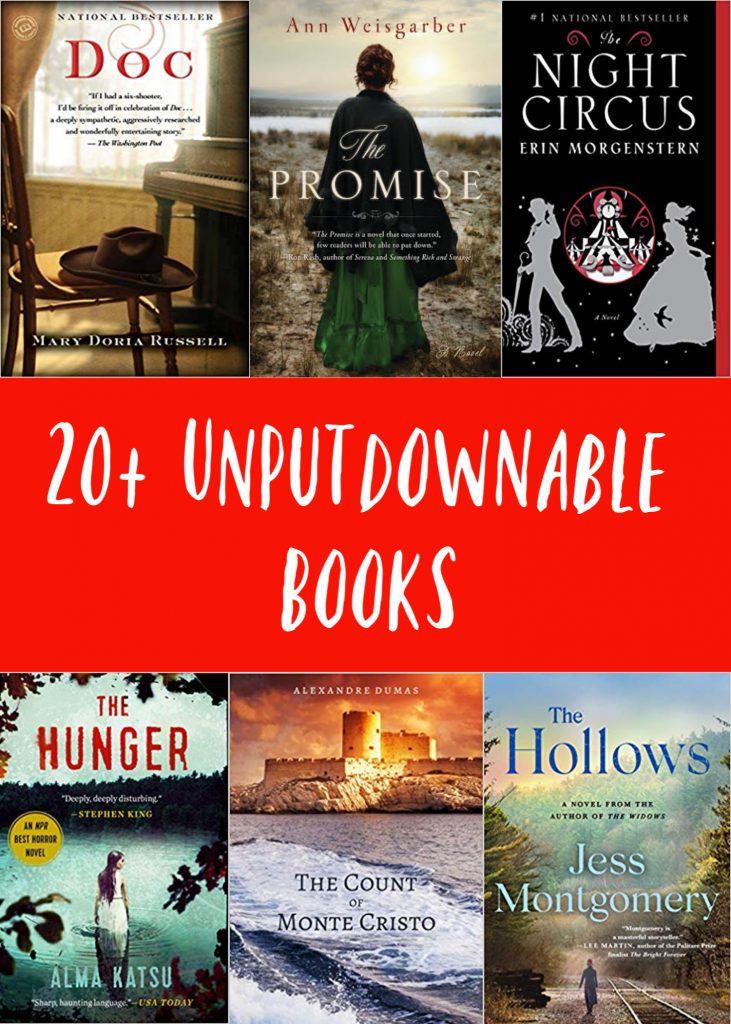 In no particular order

The Hunger by Alma Katsu – (read my review)

Ms. Katsu has a new book out featuring the Titanic called The Deep. I hope to read it. I have read all of her books and enjoyed them and she writes in a genre that I don’t read all that often. She is a very talented writer.

What Blooms from Dust by James Markert (read my review)

Mr. Markert also wrote Midnight at the Tuscany Hotel which was also a very good read.

I also enjoyed Ms. Russell’s book The Women of the Copper Country

The Night Circus by Erin Morgenstern (read my review)

Ms. Morgenstern’s new book, The Starless Sea came out this year and I have it and can’t wait to read it.

The Promise by Ann Weisbarger (read my review)

ANY of the books by Ann Weisbarger are pageturning truth be told.

The Hollows by Jess Montgomery (read my review)

The first book in this series, The Widows was just.as.good

Between Earth and Sky by Amanda Skenandore (read my review)

The Lost Castle by Kristy Cambron (read my review)

The second book in the series, The Painted Castle was a good tale too.

I also read Ms. Gwin’s second book, The Accidentals. It was also good but not as powerful in my opinion as her first.

The Last Ballad by Wiley Cash (read my review)

The Romanov Empress by C.W. Gortner (read my review)

Mr. Gortner is one of my favorite historical fiction writers. I have read almost all of his books.

The Dream Daughter by Diane Chamberlain (read my review)

I have Ms. Chamberlain’s next book, Big Lies in a Small Town on my shelf and am looking forward to reading it.

The Lost Queen by Signe Pike (read my review)

The River by Starlight by Ellen Notbohm (read my review)

Killers of the Flower Moon by David Grann (read my review)

This is a non-fiction book but it is page turning good.

The Keeper of Lost Things by Ruth Hogan (read my review)

I thoroughly enjoyed this book. It was entertaining and well written.

Murder in Containment by Anne Cleeland (read my review)

The Doyle and Acton series are the only “cop” type books I read.  They are well written and very clever.

The Count of Monte Cristo by Alexandre Dumas

This is my favorite book of all time. I also enjoyed The Three Muskateers by Mssr. Dumas.