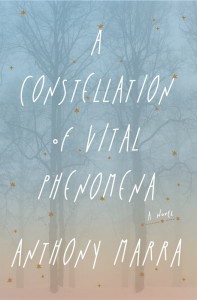 Hardcover: 400 pages
Publisher: Hogarth (May 7, 2013)
In the final days of December 2004, in a small rural village in Chechnya, eight-year-old Havaa hides in the woods when her father is abducted by Russian forces. Fearing for her life, she flees with their neighbor Akhmed–a failed physician–to the bombed-out hospital, where Sonja, the one remaining doctor, treats a steady stream of wounded rebels and refugees and mourns her missing sister. Over the course of five dramatic days, Akhmed and Sonja reach back into their pasts to unravel the intricate mystery of coincidence, betrayal, and forgiveness that unexpectedly binds them and decides their fate.
With The English Patient’s dramatic sweep and The Tiger’s Wife’s expert sense of place, Marra gives us a searing debut about the transcendent power of love in wartime, and how it can cause us to become greater than we ever thought possible.

Stegner Fellow, Iowa MFA, and winner of The Atlantic’s Student Writing Contest, ANTHONY MARRA has won the Pushcart Prize, the Narrative Prize, and a scholarship to Bread Loaf. He is also the recipient of the 2012 Whiting Writers’ Award. He has studied, resided, and traveled throughout Eastern Europe. A Constellation of Vital Phenomena is his first novel.

Let me first write that this was an excellent book. Then let me write that it was one of the hardest books I’ve read in a while. Not for the writing style but rather for the subject matter. The writing style had me reading this book in one day. Some of the scenes were very difficult to read and while the book is fiction some of the aspects are based in reality and I’ll forever be appalled at what one man can do to another.

I can’t possibly recount the well derived plot any better than the synopsis provide above. Just know that the main story takes place over 5 short days with backstory encompassing 8 years and in reality a conflict of thousands of years.

Mr. Marra’s narrative draws you in from the very first page with a horror of war and keeps you turning the pages to follow the connections between the citizens of a small village, a London trained doctor and little Havaa, the focal point around whom all the points turn. For it is saving the life of this child that sets the whole plot in motion and only as the story unfolds do we understand just how connected we all can be.

The story is told in the present, the past with sprinklings of the future that make it a fascinating experience for the reader. You don’t know from section to section what you might learn to help bring the story to its conclusion and all the pieces are necessary for complete understanding. This is a book that requires attention but your attention is well rewarded. I am keeping it for a second read as I expect I shall appreciate it even more on the second pass.

You can see the A Constellation of Vital Phenomena Tour Schedule

You can purchase A Constellation of Vital Phenomena on Amazon.com

One lucky reader (US/Can) will win a copy of A Constellation of Vital Phenomena! How do you win? It’s easy! Just hop on the Rafflecopter. Good luck everyone.

Disclosure:  I received a free copy of A Constellation of Vital Phenomena from TLC Book Tours for my honest review. I received no compensation for this post.