I have said many a time that any day I am offered a book by Anna Belfrage to read is a very good day. I thank TLC Book Tours for the opportunity to read her latest book,  A Flame Through Eternity. I was sent a copy at no charge for my honest review. It is the third and final book in her Wanderer Series. I reviewed enjoyed the first two books in the series, Smoke in Her Eyes and A Torch in His Heart. 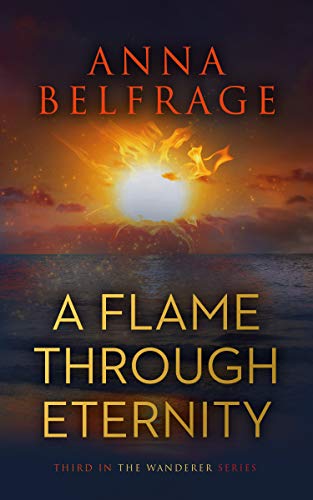 About A Flame Through Eternity:

It started 3 000 years ago. It ends now. Who survives the final confrontation?

According to Helle Madsen, being the protagonist of a time-spanning epic love story has some things going for it, primarily Jason Morris. Because seriously, meeting up with your fated lover after 3 000 years apart is not bad—at all. Unfortunately, where Jason goes, there goes Sam Woolf, yet another very, very ancient acquaintance—with the fundamental difference that Sam is not into Happily Ever After. He’s into destruction, more specifically of Jason and Helle.

Helle may believe in second-chance love, but she sure doesn’t believe in reincarnation. Okay, she didn’t believe in stuff like that until she met Jason Morris a year or so ago. By now, she has accepted that sometimes impossible things are quite, quite possible—like an ancient princess being reborn as an ambitious financial analyst.
Finding Jason was like finding the part of her that had always been missing—a perfect match. But handling Sam Woolf, the reborn version of their ancient nemesis is something of a trial. No sooner do you have him well and surely beat, but up he bounces again. Sheesh, will it take an oak stake to permanently rid their lives of him?

Sam Woolf is a powerful adversary. Too powerful, even. Jason and Helle will need help from unexpected quarters to finally bring this tangled, ancient love-and-hate triangle to some sort of conclusion. Question is, will they survive the experience?

Her most recent release, A Torch in His Heart, is a step out of her comfort zone. Having previously published historical fiction & historical romance, with this first book about Jason and Helle Anna offers a dark and titillating contemporary romance, complete with a time-slip angle and hot & steamy scenes.

This is the third and final book in the Wanderer Series featuring the characters of Helle, Jason and Sam. They are not your ordinary types – in fact they have been chasing each other through time for almost 3,000 years since Helle fell in love with Jason instead of Sam. She was pledged to Sam as a young girl in a time long ago but her heart was stolen by the Wanderer, Jason. But Sam did not like being thwarted in his love so after he extracted his revenge in their time he has followed them from century to century through era after era as Jason tried to find Helle again so they could reunite. Now that it has finally happened Sam is determined to destroy them both.

This book brings the story forward to where Jason and Helle are living a relatively peaceful life but are still looking over their shoulders because they know that Sam will be coming for them. They know that he will not let them just live in peace. But this time they have an ally in Jason’s mother – or do they?

Ms. Belfrage has such a delightful writing style. I have read all of her books but one (I did not read A Rip in the Veil – the first in her Grahamn Saga) and not one of them disappointed me. She has a magical way of drawing you into her world so that you don’t want to leave – whether that world belongs to a time traveler to 17th century Scotland or a man of torn loyalties in 14th century England or this tale of a trio hurtling through time trying to find love.

The book is sexy, fast paced and populated with compelling characters. I’m sorry that this is the end of the series but am definitely looking forward to where Ms. Belfrage will take me next.