A House Without Windows by Nadia Hashimi – Book Review

I received a free copy of A House Without Windows for my honest review. 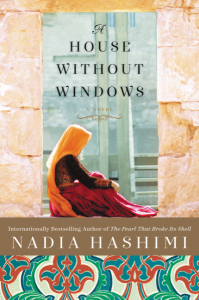 A vivid, unforgettable story of an unlikely sisterhood—an emotionally powerful and haunting tale of friendship that illuminates the plight of women in a traditional culture—from the author of the bestselling The Pearl That Broke Its Shell and When the Moon Is Low.

For two decades, Zeba was a loving wife, a patient mother, and a peaceful villager. But her quiet life is shattered when her husband, Kamal, is found brutally murdered with a hatchet in the courtyard of their home. Nearly catatonic with shock, Zeba is unable to account for her whereabouts at the time of his death. Her children swear their mother could not have committed such a heinous act. Kamal’s family is sure she did, and demands justice.

Barely escaping a vengeful mob, Zeba is arrested and jailed. As Zeba awaits trial, she meets a group of women whose own misfortunes have also led them to these bleak cells: thirty-year-old Nafisa, imprisoned to protect her from an honor killing; twenty-five-year-old Latifa, who ran away from home with her teenage sister but now stays in the prison because it is safe shelter; and nineteen-year-old Mezhgan, pregnant and unmarried, waiting for her lover’s family to ask for her hand in marriage. Is Zeba a cold-blooded killer, these young women wonder, or has she been imprisoned, as they have been, for breaking some social rule? For these women, the prison is both a haven and a punishment. Removed from the harsh and unforgiving world outside, they form a lively and indelible sisterhood.

Into this closed world comes Yusuf, Zeba’s Afghan-born, American-raised lawyer, whose commitment to human rights and desire to help his motherland have brought him back. With the fate of this seemingly ordinary housewife in his hands, Yusuf discovers that, like Afghanistan itself, his client may not be at all what he imagines.

A moving look at the lives of modern Afghan women, A House Without Windows is astonishing, frightening, and triumphant.

Nadia Hashimi was born and raised in New York and New Jersey. Both her parents were born in Afghanistan and left in the early 1970s, before the Soviet invasion. In 2002, Nadia made her first trip to Afghanistan with her parents. She is a pediatrician and lives with her family in the Washington, DC, suburbs. Visit her online at www.nadiahashimi.com

This was a challenging and at times frustrating brook. It certainly kept my interest despite being a little slow at times. It’s almost impossible for someone brought up in a Western culture to understand how women are treated in a country like Afghanistan. As I read the stories of the women and why they were imprisoned – the book is fiction but based loosely in fact – it boggled my mind.

Zeba is found with her dead husband so it is immediately assumed that she did it. She is hauled off to prison and her children are given to her husband’s family. She slowly adjusts to life in the prison where she meets the other women there for various crimes such as being seen with a man.  Bits and pieces of her family history are given throughout the book like tiny crumbs so that the reader has a full picture of who she is by about the time the last page is turned. Less is told about her husband but enough to complete the story.

The book takes place in the near past; a time of hope and change in Afghanistan. Yusef is a young lawyer trained in the US returning to his country in the hopes of moving the penal system forward. He is given Zeba’s case and he tries his hardest even though he knows it is probably hopeless. The attitudes towards women are still somewhere in the dark ages but he tries and he tries hard.

This is a book about women and their relationships – to each other, mothers and daughters, fathers and daughters, husbands and wives, brothers and sisters.  It’s about trying to bring change when change is not necessarily wanted but is desperately needed. It’s complicated and at times far too simple and therein lies my frustration. I sometimes felt that the author was trying to tie the story in knots to please a Western audience rather than truth. I don’t know. It did keep me turning the pages and it did make me think.