If you haven’t already figured it out, I am a huge fan of English history. Toss in a Plantagenet or Tudor and I just can’t say no. I thank Historical Fiction Virtual Book Tours for sending me a free copy of A King Under Siege by Mercedes Rochelle at no charge for my honest review. 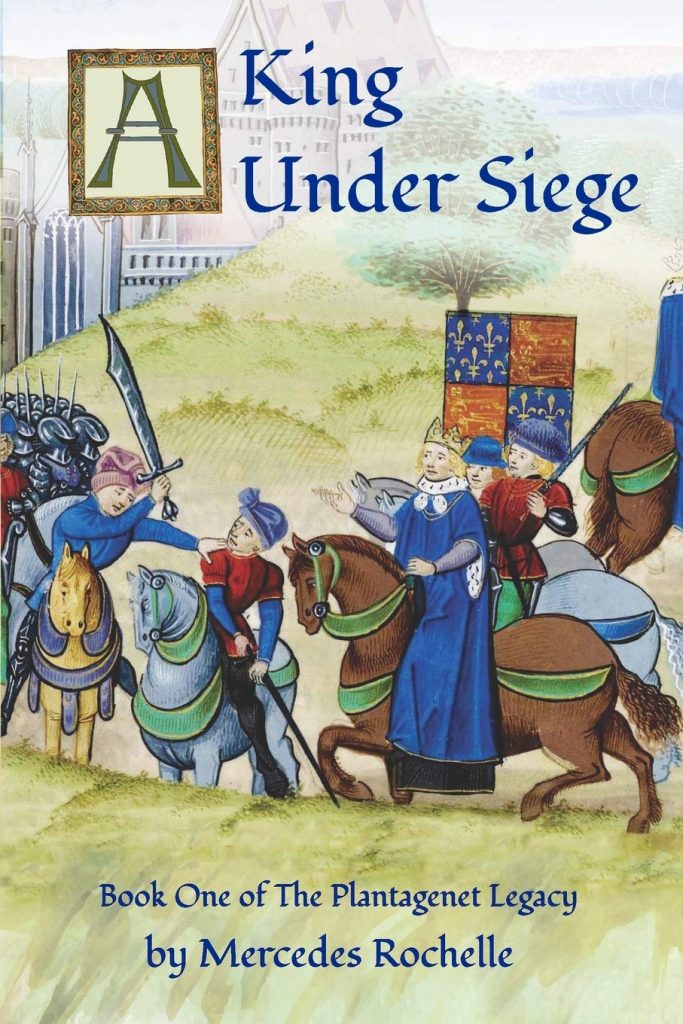 About A King Under Siege:

Richard II found himself under siege not once, but twice in his minority. Crowned king at age ten, he was only fourteen when the Peasants’ Revolt terrorized London. But he proved himself every bit the Plantagenet successor, facing Wat Tyler and the rebels when all seemed lost. Alas, his triumph was short-lived, and for the next ten years he struggled to assert himself against his uncles and increasingly hostile nobles. Just like in the days of his great-grandfather Edward II, vengeful magnates strove to separate him from his friends and advisors, and even threatened to depose him if he refused to do their bidding. The Lords Appellant, as they came to be known, purged the royal household with the help of the Merciless Parliament. They murdered his closest allies, leaving the King alone and defenseless. He would never forget his humiliation at the hands of his subjects. Richard’s inability to protect his adherents would haunt him for the rest of his life, and he vowed that next time, retribution would be his.

Born and raised in St. Louis MO, Mercedes Rochelle graduated with a degree in English literature from the University of Missouri. Mercedes learned about living history as a re-enactor and has been enamored with historical fiction ever since. A move to New York to do research and two careers ensued, but writing fiction remains her primary vocation. She lives in Sergeantsville, NJ with her husband in a log home they had built themselves.

Richard II is one of those kings that I honestly don’t know a lot about. In all of my historical fiction reading I have only had the opportunity to read one other book about him.  As is noted in the author’s note at the end of the book, much of how Richard II is perceived by history is thanks to Shakespeare who doesn’t exactly have a strong track record of representing his subjects accurately. As it is always said, history is written by the victors and they often distort the records of those they have defeated.

I don’t know if this is going to be two books or three but this first book is really good read. Anyone who loves history will enjoy this trip back in time to the court of a man far too young to to be king surrounded by nobles who were more concerned with going to war and their own interests rather than the governing of the kingdom. Richard had no strong well of support so he leans on his friends. These friends are hated by the lords of the land for they think they are giving him bad advice. Richard feels his uncles and the other Lords are trying to control him.

It’s a well researched and fascinating look at this enigmatic king. Ms. Rochelle brings Richard to life as a young man who was taught that he was King and that he was in charge. When he wanted to pursue peace with France instead of continuing wars there was uproar. Despite the fact that the taxes that were necessary to pay for the wars caused an uprising that almost cost Richard his reign.  Soldiers want to fight and that is that.

It’s the kind of a book that I found myself lost in. Despite knowing what would be I still read each page with hope that history had somehow changed. That will have to wait for the next volume of the book as this one ended with Richard asserting his authority. It was a powerful ending and a perfect place to begin the next chapter.

During the Blog Tour, we are giving away 5 paperback copies of A King Under Siege! To enter, please use the Gleam form below.

– Giveaway ends at 11:59 pm EST on March 18th. You must be 18 or older to enter.
– Paperback giveaway is open to the US only.
– Only one entry per household.
– All giveaway entrants agree to be honest and not cheat the systems; any suspicion of fraud will be decided upon by blog/site owner and the sponsor, and entrants may be disqualified at our discretion.
– The winner has 48 hours to claim prize or a new winner is chosen.

A King Under Siege