A Match for Marcus Cynster Excerpt Tour and Giveaway 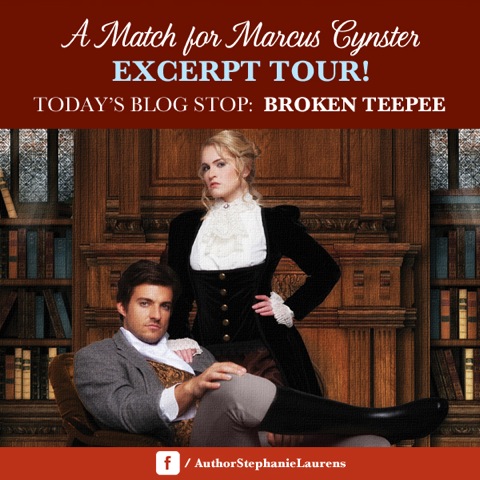 Today is day 5 of the excerpt tour for A Match for Marcus Cynster. So read today’s teaser, enter the giveaway and be sure to continue along on the tour.

The doctor came, viewed the bodies, and promised to send his report to Sir Godfrey Riddle, the local magistrate.
Sir Godfrey arrived promptly at two o’clock. He came up the front steps, his expression grave and concerned. “Niniver, my dear.” After taking her hands in an avuncular clasp, he squeezed gently. “This must be so very distressing for you.”
She’d written only that Nolan had killed himself, and that subsequently they’d found Nigel’s body. Her expression uninformative, she inclined her head. How to explain that, while her father’s death and Nigel’s disappearance had rocked and shaken her, Nolan’s death and their subsequent understanding had restabilized her—had restored her confidence in her ability to read people, in her ability to navigate her world? The earlier situation, she simply hadn’t understood. Now, she understood all too well.
As for grief—those who had deserved her tears had been dead for nearly a year. She had too much to do to preserve their memories to feel much over Nolan’s passing.
Sir Godfrey released her as Lord Richard Cynster and Niniver’s cousin, Thomas Carrick, rode into the forecourt—followed by a carriage that swung wide to draw up before the steps. Thomas dismounted, tossed his reins to Sean, and went to open the carriage door. He handed down his mother-in-law, Richard’s wife, Catriona, and then, as if she were made of porcelain, Thomas assisted his wife—Catriona and Richard’s daughter Lucilla—to the ground.
Lucilla was pregnant, the whisper was with twins. Only slightly taller than Niniver, even though she was still many months from confinement, Lucilla certainly looked large enough for the rumor to be true. Yet from the reassuring smile she sent Thomas and the ease with which, supported by his arm, she climbed the steep front steps, she wasn’t seriously bothered by the extra weight she was carrying.
Although she hadn’t requested their presence, Niniver had hoped both ladies would come; she was relieved they had. After touching cheeks, squeezing fingers, and exchanging grave and muted greetings, she steered her collection of “authorities” into the drawing room, where Norris stood waiting.
Niniver had had the footmen rearrange the furniture. After greeting Norris, Lucilla let herself down on one sofa, and Catriona sank onto the matching sofa facing her. Richard sat beside his wife, and Thomas sat alongside Lucilla. Sir Godfrey took one of the armchairs set to one side of the fireplace and angled to face the room, leaving Niniver to sink into its mate.
Norris had placed a straight-backed chair on Niniver’s left. As Norris sat, she turned to Sir Godfrey. “If you don’t mind, I would like several clansmen to attend this meeting, as any decisions made will affect the whole clan.”
Sir Godfrey nodded somberly. “Indeed. This is a dire business for you all.”
Ferguson had hovered by the door; at Niniver’s nod, he ushered in Mrs. Kennedy, Bradshaw, Forrester, Canning, Phelps, and Matt. Ferguson followed, and Sean brought up the rear, closing the door behind him.
Ferguson and Sean placed the straight-backed chairs they’d earlier carried in from the dining room in a semi-circle between the ends of the sofas and the door, then with nods to the assembled gentry that were gravely returned, the clan members sat.
Niniver held Thomas’s gaze for a moment, then she looked at Sir Godfrey. “It might be best if I relate recent events as they occurred, and then we can move on to what we, the clan, subsequently deduced and confirmed, and ultimately to what we now believe occurred in the deaths of not just Papa, but also of Faith and Joy Burns.”
Sir Godfrey’s gaze sharpened. “I see.” He nodded. “Pray proceed.” 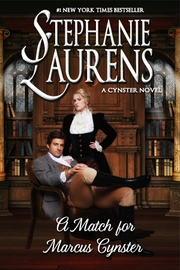 Duty compels her to turn her back on marriage. Fate drives him to protect her come what may. Then love takes a hand in this battle of yearning hearts, stubborn wills, and a match too powerful to deny. #1 New York Times bestselling author Stephanie Laurens returns to rugged Scotland with a dramatic tale of passionate desire and unwavering devotion.

Restless and impatient, Marcus Cynster waits for Fate to come calling. He knows his destiny lies in the lands surrounding his family home, but what will his future be and with whom will he share it?

Of one fact he feels certain: his fated bride will not be Niniver Carrick. His elusive neighbor attracts him mightily, yet he feels compelled to protect her—even from himself. Fickle Fate, he’s sure, would never be so kind as to decree that Niniver should be his. The best he can do for them both is to avoid her.

Niniver has vowed to return her clan to prosperity. The epitome of fragile femininity, her delicate and ethereal exterior cloaks a stubborn will and an unflinching devotion to the people in her care. She accepts that she cannot risk marrying and losing her grip on the clan’s reins to an inevitably controlling husband. Unfortunately, many local men see her as their opportunity.

Soon, she’s forced to seek help to get rid of her unwelcome suitors. Powerful and dangerous, Marcus Cynster is perfect for the task. Suppressing her wariness over tangling with a gentleman who so excites her passions, she appeals to him for assistance with her peculiar problem.

Although at first he resists, Marcus discovers that, contrary to his expectations, his fated role is to stand by Niniver’s side and, ultimately, to claim her hand. Yet in order to convince her to be his bride, they must plunge headlong into a journey full of challenges, unforeseen dangers, passion, and yearning, until Niniver grasps the essential truth—that she is indeed a match for Marcus Cynster.