I have long been a fan of Christine Trent’s work so I was thrilled to accept a copy of her latest book, A Murderous Malady. My thanks to Historical Fiction Virtual Book Tours for sending a copy at no charge for my honest review. 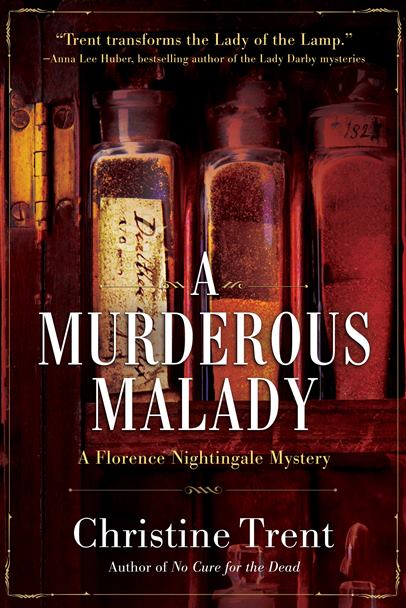 About A Murderous Malady:

Cholera has broken out in London, but Florence Nightingale has bigger problems when people begin dying of a far more intentional cause—murder.

The London summer of 1854 is drawing to a close when a deadly outbreak of cholera grips the city. Florence Nightingale is back on the scene marshaling her nurses to help treat countless suffering patients at Middlesex Hospital as the disease tears through the Soho slums. But beyond the dangers of the disease, something even more evil is seeping through the ailing streets of London.

It begins with an attack on the carriage of Florence’s friend, Elizabeth Herbert, wife to Secretary at War Sidney Herbert. Florence survives, but her coachman does not. Within hours, Sidney’s valet stumbles into the hospital, mutters a few cryptic words about the attack, and promptly dies from cholera. Frantic that an assassin is stalking his wife, Sidney enlists Florence’s help, who accepts but has little to go on save for the valet’s last words and a curious set of dice in his jacket pocket. Soon, the suspects are piling up faster than cholera victims, as there seems to be no end to the number of people who bear a grudge against the Herbert household.

Now, Florence is in a race against time—not only to save the victims of a lethal disease, but to foil a murderer with a disturbingly sinister goal—in A Murderous Malady.

Christine Trent is the author of the Florence Nightingale Mysteries, the Lady of Ashes historical mystery series, about a Victorian-era undertaker, and three other historical novels. Christine’s novels have been translated into Turkish, Polish, and Czech. She writes from her two-story home library, where she lives with her husband, four precocious cats, a large doll collection, entirely too many fountain pens, and over 4,000 catalogued books.

A Murderous Malady is the second book in a series featuring Florence Nightingale – yes that Florence Nightingale – as a not only a nurse but also as a sort of female Sherlock Holmes. I did not have the good fortune to read the first book, No Cure for the Dead, but don’t worry if you are in the same boat – it won’t matter. This book stands on its own quite well.

One of Florence’s good friends is married to the Secretary at War. Elizabeth Herbert is in a carriage with her father in law, a general of the English army, when suddenly curses and then shots ring out. Their coachman is killed but fortunately Elizabeth and her father are shaken up but not harmed. Sidney Herbert calls Florence to the house to see Elizabeth and to ask her to find out who tried to kill her – for he believes it was an attack on his wife. Florence feels it’s an investigation best taken up by the police but Sidney does not want them involved as the attention would not be welcome while he is trying to deal with sensitive War Dept. issues.

Florence reluctantly agrees and sets off to try and discover why someone would want her friend dead. At the same time cholera is making an appearance in the poorer sections of London and she is called upon to help in a hospital that truly needs her revolutionary ideas.  She is also trying to figure out the how of cholera infection. She has a theory but so do some other people in London. Will someone learn the method of transmission before it’s too late? And will they be able to stop it?

I found this to be a clever novel. The combination of the medical mystery of the cholera epidemic tied together with the murder mystery made for a different kind of book. Plus it’s historical so that made me happy too. I’m always happier when I’m reading a book set in the past. Ms. Trent creates a very dark London – one where the poor are left to languish with little care for them and few caring about them. Her Florence Nightingale is a very strong woman who is not afraid to share her knowledge and she does not back down when confronted by men who think they are superior simply because of their sex.

It was a pretty quick read – I finished it in one day. Not in one sitting as I had a babka to bake. But it was a fascinating look at a smart woman who was definitely ahead of her time. I look forward to the next installment in the series.

You can read other reviews, find excerpts, guest posts, Q&As and giveaways!

Monday, May 6
Interview at Let Them Read Books
Review & Giveaway at Passages to the Past

Tuesday, May 7
Review at Peppermint Ph.D.

Thursday, May 9
Guest Post at Short Book and Scribes

Friday, May 10
Review at Broken Teepee
Feature at The Book Junkie Reads
Review & Excerpt at Clarissa Reads it All

Sunday, May 12
Review at A Bookish Affair

Monday, May 13
Review at A Chick Who Reads
Feature & Giveaway at Queen of Random
Interview at Myths, Legends, Books & Coffee Pots

Tuesday, May 14
Excerpt & Giveaway at To Read, Or Not to Read

Thursday, May 16
Feature at CelticLady’s Reviews
Review at History from a Woman’s Perspective

Friday, May 17
Review at The Lit Bitch

Saturday, May 18
Review at Just One More Chapter

Sunday, May 19
Review, Q&A, and Giveaway at Maiden of the Pages

Monday, May 20
Giveaway at Coffee and Ink
Review & Excerpt at Jathan & Heather