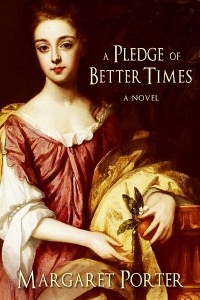 A sweeping tale of ambition, treachery, and passion…

Political and religious turmoil bring about revolution and yet another coronation before Charles returns to claim his promised bride. As companion to Queen Mary II, Diana has followed her de Vere forbears into royal service. She expects Charles to abandon his military career after marriage, but he proves unwilling to join the ranks of the courtiers he despises and mistrusts.

In palace corridors and within their own household the young duke and duchess confront betrayals, scandals, and tragedies that threaten to divide them. And neither the privileges of birth nor proximity to the throne can ensure their security, their advancement—or their happiness.

Margaret Porter is an award-winning, bestselling novelist whose lifelong study of British history inspires her fiction and her travels. A former stage actress, she has also worked in film, television, and radio.

I have to state that I enjoy books that tell the stories of lesser known women in history. A Pledge of Better Times does exactly that by weaving the story of Diana de Vere from snippets of her left in correspondence and other written sources. We meet her when she is still a child and she encounters King Charles II and he introduces her to his three sons by different mistresses. She is the daughter of the Earl of Oxford, a close friend of the king but a noble without a fortune. Soon Charles dies and the kingdom is thrown into disarray as his brother James takes the thrown and the religious issues that all thought were settled soon rear their ugly head. Within in the framework of history young Diana de Vere comes of age and marries one of Charles’ bastards, Charles Beauclerk, Duke of St. Albans.

Complicated history leads to compelling story possibilities and this book was a really good read. It is based solidly in reality as these two characters existed and followed the paths laid down in the book. Ms. Porter brings them to life with with rich detail and a relationship that stood the tests thrown in its way. I was quite taken with both Diana and Charles and found myself rooting for both of them as I read the book. Charles II is always an entertaining monarch so any story with him even as an ancillary character is going to be a fun book.

I found that I really didn’t want the story to end. I wanted to continue on with their story and to go on in their lives and the lives of their children. It is written beautifully and full of historical detail. This is not a period I wander into that often so it was nice to visit this period of English history again.

One lucky US reader will win a copy of A Pledge of Better Times just enter as many times as you would like on the Gleam widget. Good luck everyone.

A Pledge of Better Times