A Promise Given: A Henrietta and Inspector Howard Novel by Michelle Cox – Book Review

I was quite pleased to be asked to review the new book by Michelle Cox. A Promise Given is the next installment in the Henrietta and Inspector Howard series. I was sent a copy at no charge for my honest review.  Be sure to check out my review of A Ring of Truth, the second book in the series. 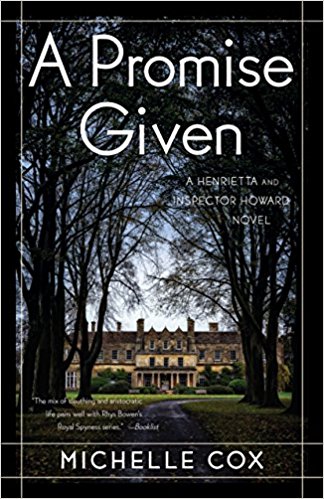 About A Promise Given:

This third book in the Henrietta and Inspector Howard series provides a delightful romp through the English countryside and back.

Anxious to be married, Henrietta and Clive push forward with their wedding plans despite their family differences, made worse now by Oldrich Exley’s attempts to control the Von Harmons. When the long-awaited wedding day arrives, there is more unfolding than just Clive and Henrietta’s vows of love. Stanley and Elsie’s relationship is sorely tested by the presence of the dashing Lieutenant Harrison Barnes-Smith and by Henrietta’s friend Rose―a situation that grows increasingly dark and confused as time goes on.

As Clive and Henrietta begin their honeymoon at Castle Linley, the Howards’ ancestral estate in England, they encounter a whole new host of characters, including the eccentric Lord and Lady Linley and Clive’s mysterious cousin, Wallace. When a man is murdered in the village on the night of a house party at the Castle, Wallace comes under suspicion―and Clive and Henrietta are reluctantly drawn into the case, despite Clive’s anxiety at involving his new bride and Henrietta’s distracting news from home.

Delicately attempting to work together for the first time, Clive and Henrietta set out to prove Wallace’s innocence, uncovering as they do so some rather shocking truths that will shake the Linley name and estate forever.

Michelle Cox holds a BA in English literature from Mundelein College, Chicago, and is the author of the award-winning Henrietta and Inspector Howard series. Book two of the series, A Ring of Truth, was released April 2017 with She Writes Press. Cox is also known for her charmingly popular Novel Notes of Local Lore, a blog dedicated to Chicago’s forgotten residents. She lives with her husband and three children in the Chicago suburbs.

This is my second book featuring Henrietta and Inspector Howard.  These two are a couple in love from two different sides of society. That doesn’t bother Clive Howard though – he is in love and he doesn’t care who Henrietta’s family is. He just wants to settle down with her and live their lives. But circumstances, responsibilities and life itself is not going to let that happen.

The bulk of this book is the preparation for and the wedding of Clive and Henrietta. A fair bit of time is also spent on the disposition of Henrietta’s family and her sister’s relationships. I’m sure that this is all laying groundwork for future books which is just fine by me as I thoroughly love being immersed in the lives of the characters that Ms. Cox has created.

The mystery aspect of this novel doesn’t really kick in until the last third of the tale while Henrietta and Clive are on their honeymoon in England visiting family. While staying at the family castle (?!) a man is murdered in the  local town and the suspect is Clive’s cousin. Even though Clive has resigned from the police department he is still a detective at heart and so he interjects himself into the investigation – for his cousin’s sake of course! Henrietta also helps but finds herself learning that being Mrs. Howard brings out a side of Clive she does not necessarily like.

I enjoyed this book as it further fleshed out the characters from the A Ring of Truth. Much more of Henrietta’s mother’s story was told and it allows the reader to understand the root of her bitterness. There is not a lot of plot in this tale as the action as it were does not really happen until the end of the book. There is a small subplot involving Henrietta’s sister, Elsie and her romances.

Ms. Cox takes great care in setting the scenes for her characters. It could be the denizens of a dance club or a party in the toniest house in the city. As the reader you will feel as if you are there with the characters as all is so well depicted. I am really looking forward to the next installment in this endearing series.