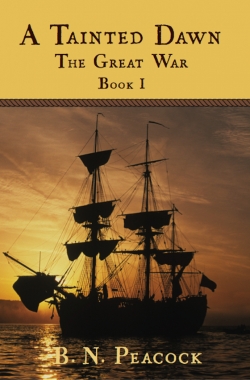 August 1789. The Rights of Man. Liberty. Equality. Idealism. Patriotism. A new age dawns. And yet, old hostilities persist: England and Spain are on the brink of war. France, allied by treaty with Spain, readies her warships. Three youths – the son of an English carpenter, the son of a naval captain, and the son of a French court tailor – meet in London, a chance encounter that entwines their lives ever after. The English boys find themselves on the same frigate bound for the Caribbean. The Frenchman sails to Trinidad, where he meets an even more zealous Spanish revolutionary. As diplomats in Europe race to avoid conflict, war threatens to explode in the Caribbean, with the three youths pitted against each other. Will the dawn of the boys’ young manhood remain bright with hope? Or will it become tainted with their countrymen’s spilled blood?


B. N. Peacock has had a life-long passion for history. Her childhood hero was Lord Nelson. Her second passion was writing, which equally early on won her an honorable mention in a national Read Magazine contest for a short story about Bunker Hill as told from a British correspondent’s view. She majored in Classical languages as an undergraduate, and went on to get graduate degrees in International Relations and Agricultural Economics respectively. After college, she worked for USDA’s Economic Research Service and wrote for their Situation and Outlook Reports.
She returned to her love for history and writing when, as sandwich generation mother caring for children and elderly parent, she came up with the idea of writing about history from different perspectives. This was the start of A Tainted Dawn and the Great War (French Revolutionary and Napoleonic Wars) series. She currently lives in Manassas, Virginia, close to the Bull Run battlefield, with her husband and family, and also Mr. Orlando Cat and Fiona, the Famous Flying Golden Retriever.
Connect with B.N. Peacock:  WEBSITE | BLOG

I am very torn on this book. If taken as three separate stories it’s good but when tied together by the “chance meeting” of the three protagonists I start asking a lot of questions that have no answer. These three boys meet for about 5 minutes when Edward a young English aristocrat is taken by his mother to a tailor shop for mourning clothes. There he is insulted by Louis, the son of the tailor who is a closeted French revolutionary. The “discussion” is taken outside where they encounter young Jemmy, a poor English boy just trying to earn enough money to feed his sister by playing his fiddle. Edward saves Jemmy from Louis’s anger and gives him a gold coin. Louis vows to hate Edward forever. Seriously? Why? And this is my problem I cannot grasp a lifelong hate over something so trivial.

The stories then break off as each boy finds his way in the world; some on their own, some with “help.” Edward is dropped on a boat by his grandfather in hopes he will disappear so then the grandfather can take over the inheritance left to Edward by his father. Jemmy ends up on the same ship as a means of escaping his abusive father. Louis is my least favorite character and the least developed if you ask me. He is one note; Viva la Revolution – and that is it! Oh, excuse me two notes – hate the English boy for all he is worth because he is an Aristo.

I was fascinated when at sea. The life on board the ship and the interactions between the shipmates – good, bad and awful – made for good storytelling. Young Edward had always wanted to go to sea to follow in the footsteps of the father he had never met. He had an ideal of the man that he wanted to live up to; he made many decisions based upon how he felt his father would have.

Jemmy was fiddler for the boat but soon starts having prophetic dreams (really?) and feels he must go home to save his father so he deserts and makes his way back to England.  There things go from bad to worse as his dream soon comes true.

Louis is thrown out of his home for his revolutionary ways and finds himself on Trinidad where he tries to import France’s ideals to a public not really interested in learning about it. Getting there on borrowed funds to find himself an indentured servant in charge of a team of slaves galls him and he is soon teaching the slaves about The Rights of Man and has them singing revolutionary songs. This does not bode well and he soon finds himself in serious trouble and bound back for France in chains.

All of this happens with a threat of war between Spain and England in the background and of course, the Revolution in France is just about to blow up. This book is the first in a five book series and it does leave the reader with cliffhangers to set up the next volume. The history is interesting, the life at sea is interesting, the characters – not so interesting. And the set up to make these three bound for life is weak at best. I would find myself really getting into the book and then it would pull back to this link and I would start asking all these questions again and lose my interest in the story. It just didn’t make sense to me….maybe it does in the next book? I don’t know.

You can see the A Tainted Dawn Blog Tour Schedule

You can purchase A Tainted Dawn on Amazon.com

One reader – and this one is open INTERNATIONALLY – will win a copy of A Tainted Dawn. How do you win? It’s easy! Just hop on the Rafflecopter. Good luck everyone.

Disclosure:  I received a free e-copy of A Tainted Dawn from Historical Fiction Virtual Book Tours for my honest review. I received no compensation for this post.