A Torch in His Heart by Anna Belfrage – Book Review

When I was asked if I wanted to read the latest book from Anna Belfrage I could not answer yes quickly enough. A Torch in His Heart is the first book in her new Wanderer Series. It’s a sexy one! I thank Book Junkie Promotions for sending me a copy at no charge for my honest review. 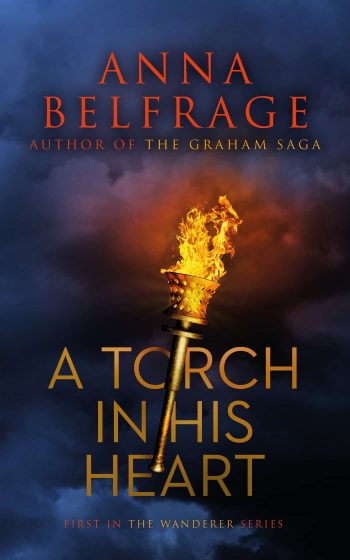 About A Torch in His Heart:

In the long lost ancient past, two men fought over the girl with eyes like the Bosporus under a summer sky. It ended badly. She died. They died.

Since then, they have all tumbled through time, reborn over and over again. Now they are all here, in the same place, the same time and what began so long ago must finally come to an end.

Ask Helle Madsen what she thinks about reincarnation and she’ll laugh in your face. Besides, Helle has other stuff to handle, what with her new, exciting job in London and her drop-dead but seriously sinister boss, Sam Woolf. And then one day Jason Morris walks into her life and despite never having clapped eyes on him before, she recognizes him immediately. Very weird. Even more weird is the fact that Sam and Jason clearly hate each other’s guts. Helle’s life is about to become extremely complicated and far too exciting.

I have, at this point, read all but one of Ms. Belfrage’s historical fiction books. This new series is a bit of a departure from both her time traveling Graham Saga or her Midieval King’s Greatest Enemy series. Rather than time travelers this book features beings that have reincarnated through time. It’s a tale as old as time as we have two men fighting over one woman. One good, one evil.

I will warn you, don’t start this book unless you have the time to read it through ’cause it’s going to grab you from the first page and you are going to have a hard time putting it down. The book introduces the reader to Helle first – the woman who drives the passions of the two men. One of those men is Sam. a rich, powerful and driven businessman. He wants to possess her. The second is Jason who is also a handsome businessman but he wants to love and protect her.

Helle does not remember her past lives but Jason and Sam do. When she meets Sam he somehow seems to exert a control over her she does not understand. If she looks into his eyes she seems to lose her free will. On the other hand, when she meets Jason for the first time it’s as if she has known him forever. He also gets her away from Sam so for that she is grateful but she does not want to believe what he is telling her about their entwined lives. But it does explain some of the dreams that she has.

The three of them are together in the same time again and this time Jason is determined to have his happily ever after and Sam is determined to vanquish Jason and possess Helle. Who will survive in this lifetime?

This is a page turner of a book. It’s full of sexy and compelling characters. This is an all out battle of good versus evil and you are not sure at any point which side is going to win. Sam is a man who feels the world should bow to him and his power and Jason is what is known as a Wanderer – they have special healing powers but they can be used in inappropriate ways and Jason knows he has done so when it comes to Sam.

I found this to be a riveting tale. I opened the book and didn’t want to stop reading. It’s a very sexy book so if you are not comfortable with sex scenes in your reading this will not be the book for you. I will look forward to the next volume to see what happens next in the lives of these three beings. Ms. Belfrage has created yet another complex world full of fascinating characters to thrill her readers.