Give me a book with art at its center and I’m a happy woman. If it’s historical – even better. I thank TLC Book Tours for sending me a copy of A Trace of Deceit by Karen Odden at no charge for my honest review. 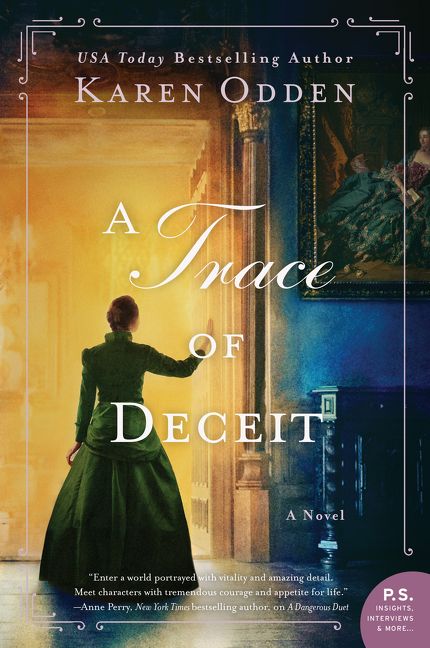 About A Trace of Deceit:

From the author of A Dangerous Duet comes the next book in her Victorian mystery series, this time following a daring female painter and the Scotland Yard detective who is investigating her brother’s suspicious death.

Edwin is dead. That’s what Inspector Matthew Hallam of Scotland Yard tells Annabel Rowe when she discovers him searching her brother’s flat for clues. While the news is shocking, Annabel can’t say it’s wholly unexpected, given Edwin’s past as a dissolute risk-taker and art forger, although he swore he’d reformed. After years spent blaming his reckless behavior for their parents’ deaths, Annabel is now faced with the question of who murdered him—because Edwin’s death was both violent and deliberate. A valuable French painting he’d been restoring for an auction house is missing from his studio: find the painting, find the murderer. But the owner of the artwork claims it was destroyed in a warehouse fire years ago.

As a painter at the prestigious Slade School of Art and as Edwin’s closest relative, Annabel makes the case that she is crucial to Matthew’s investigation. But in their search for the painting, Matthew and Annabel trace a path of deceit and viciousness that reaches far beyond the elegant rooms of the auction house, into an underworld of politics, corruption, and secrets someone will kill to keep.

A Trace of Deceit can be purchased at Harper Collins

KAREN ODDEN received her PhD in English literature from New York University and has taught at the University of Wisconsin-Milwaukee and the University of Michigan-Ann Arbor. She currently serves as an assistant editor for the academic journal Victorian Literature and Culture. Her debut novel, A Lady in the Smoke, was a USA Today bestseller.

I am a big fan of books that center on art. A Trace of Deceit is a bit about art, both painting and the artists that paint. It centers on a brother and sister, both with talent but one is murdered.  Edwin and Annabel did not have a happy childhood; both showed signs of artistic talent but Edwin was far better and Annabel is a woman so what good would it do her? Their father was not kind to either one of them but he was far worse to Edwin as he thought he was wasting his talent. He sent Edwin away to school and things just went downhill from there. Edwin’s life unraveled and he ends up in jail for forgery. After he serves his time he swears to Annabel that he is a changed man but she is wary about trusting him.

She did not expect that when she did not hear from him about their standing Tuesday meeting that he was dead. When she arrives at his apartment she finds two Scotland Yard Officers. This leads to her helping one of them as he tries to find out who killed Edwin and why.

What follows is an novel full of engaging characters with a mystery that is twisty and far more than it appears at first. It kept me reading and interested until the last page. The inevitable romance was not forced and played out easily. The information put forth about art and artists did not come across as tutorial and was interesting. All in all a delightful way to spend an afternoon.