I read very few murder mystery series but Henrietta and Inspector Howard will always be on my bookshelf. Their latest adventure from author Michelle Cox, A Veil Removed, will be released on April 30, 2019. I thank the publisher for sending me a copy at no charge for my honest review. 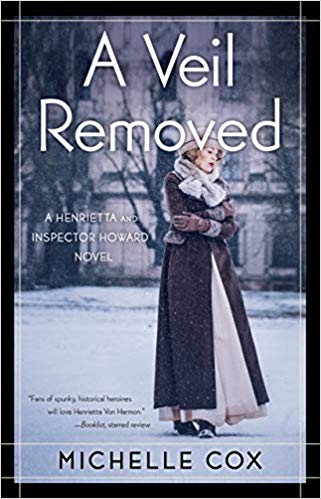 About A Veil Removed:

Murder is never far from this sexy couple . . . even during the holidays!

Their honeymoon abruptly ended by the untimely death of Alcott Howard, Clive and Henrietta return to Highbury, where Clive discovers all is not as it should be. Increasingly convinced that his father’s death was not an accident, Clive launches his own investigation, despite his mother’s belief that he has become “mentally disturbed” with grief. Henrietta eventually joins forces with Clive on their first real case, which becomes darker―and deadlier―than they imagined as they get closer to the truth behind Alcott’s troubled affairs.

Meanwhile, Henrietta’s sister, Elsie, begins, at Henrietta’s orchestration, to take classes at a women’s college―an attempt to evade her troubles and prevent any further romantic temptations. When she meets a bookish German custodian at the school, however, he challenges her to think for herself . . . even as she discovers some shocking secrets about his past life.

Michelle Cox is the author of the multiple award-winning Henrietta and Inspector Howard series as well as “Novel Notes of Local Lore,” a weekly blog dedicated to Chicago’s forgotten residents. She suspects she may have once lived in the 1930s and, having yet to discover a handy time machine lying around, has resorted to writing about the era as a way of getting herself back there. Coincidentally, her books have been praised by Kirkus, Library Journal, Publishers Weekly, Booklist, and many others, so she might be on to something. Unbeknownst to most, Michelle hoards board games she doesn’t have time to play and is, not surprisingly, addicted to period dramas and big band music. Also marmalade.

When A Promise Given left off Henrietta and Inspector Howard(Clive) had just been married and were heading off to England to celebrate their honeymoon where of course they bumped up against a mystery because that is what happens to them. With this latest volume we find them trying to get back home as quickly as possible because Clive’s father has died. It’s been called an accident but something doesn’t ring right about that for Clive.

Also playing out while Clive is trying to sort out his father’s murder, Henrietta is concerned about her sister who has attached herself to a most unsuitable young man. Now that their lineage has been outed and they find themselves part of a wealthy family the fortune hunters and other less than gentlemanly types are taking advantage. It leaves Henrietta’s sister feeling vulnerable and exposed.

As Clive gets closer to answers he and Henrietta find themselves facing a familiar foe. Not to mention dealing with some issues as to knowing who they can trust. It leaves them wondering if life will ever be calm and peaceful.

This is my third book in the series and I do hope it is not my last. These two are a delight as an investigative duo. They work well together and their banter is delightful. Clive is a bit dry and by the book – although he is changing – and Henrietta is all instinct and heart. They both have so much to teach each other as long as the other learns to listen.

Their family members are a great addition to the story as Henrietta’s family reminds upper crust Clive what the world is really like. His family adds gravitas to hers. See, a match made in heaven. If you are looking for a clever series to read this will be for you but don’t worry – each book stands alone just fine as a good book to read for its own sake.