There is Always Tomorrow by Anna Belfrage – Book Review

Any day I can read a book by Anna Belfrage is a good day if you ask me. Her Graham Saga has been one of my favorite reading experiences of the last couple of years so the unexpected addition of another book in the series – with maybe, just maybe more coming! – made me a very happy reader. I was delighted to accept a free copy of There is Always Tomorrow from Historical Fiction Virtual Book Tours at no charge for my honest review. 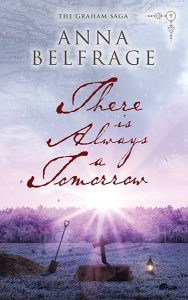 About There is Always Tomorrow:

It is 1692 and the Colony of Maryland is still adapting to the consequences of Coode’s Rebellion some years previously. Religious tolerance in the colony is now a thing of the past, but safe in their home, Alex and Matthew Graham have no reason to suspect they will become embroiled in the ongoing religious conflicts—until one of their sons betrays their friend Carlos Muñoz to the authorities.

Matthew Graham does not leave his friends to rot—not even if they’re papist priests—so soon enough most of the Graham family is involved in a rescue attempt, desperate to save Carlos from a sentence that may well kill him.

Meanwhile, in London little Rachel is going through hell. In a matter of months she loses everything, even her surname, as apparently her father is not Master Cooke but one Jacob Graham. Not that her paternity matters when her entire life implodes.

Will Alex and Matthew be able to help their unknown grandchild? More importantly, will Rachel want their help?

You can follow the There is Always Tomorrow Tour Schedule

Other than on her website, www.annabelfrage.com, Anna can mostly be found on her blog, http://annabelfrage.wordpress.com – unless, of course, she is submerged in writing her next novel. You can also connect with Anna on Facebook, Twitter and Goodreads.

I have to admit that I wasn’t expecting another book in this series. I thought it had ended with To Catch a Falling Star. Don’t get me wrong – I am beyond pleased that Ms. Belfrage has decided to continue writing about Alex and Matthew. After reading all but the first book I’m obviously very invested in these characters.

This book focuses on religious intolerance as the main arc of the tale, combined with the greed of man. One would like to think that we had learned from the 17th century but sadly we are still living in a time of religious intolerance and the greed of man albeit not quite as bad. Alex and Matthew’s rather self righteous and pretentious son has reported their friend Father Carlos to the authorities because he is a Catholic priest not fully understanding the consequences of his actions. He is young and walks about with his sense of moral superiority but his mother and father will have none of it and he doesn’t understand why they do not back him

I’ll not spoil the plot and this is an ongoing and quite complicated part of the story. There is much more to the book including various goings on back in London with Matthew’s brother Luke – even though they have a, oh let’s say difficult relationship themselves, they are both more than happy to help their nephews. Family is family after all – and that includes the illegitimate daughter of Jacob, Alex and Matthew’s dead son. Her story is particularly sad and she is a very unpleasant character. I was quite torn with her – at times I wanted to slap her silly at others I felt she needed a long hug. Such is the dichotomy of a well written character.

Overall another great read covering lots of complicated and simple issues facing people living in 17th century America and England where one of them happens to have traveled through time. There is nothing stopping you from just reading this book, it can certainly be read stand alone but the stories are so much richer for having read what came before. Ms. Belfrage is a magical writer drawing you into the worlds of her creations and making it very hard to leave them behind. I was quite pleased to read at the end that she might continue the Graham Saga. I for one would not be disappointed.