I so enjoy when I can read a book that offers me a glimpse into a culture that is different from what I know. America for Beginners by Leah Franqui offered that as well as a universal story of searching for answers but finding so very much more. 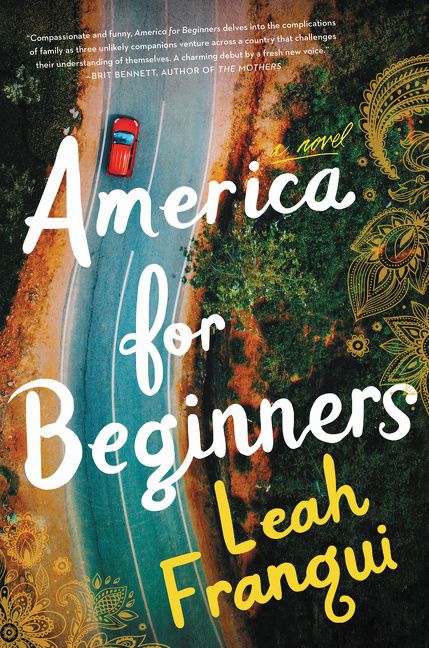 About America for Beginners:

Recalling contemporary classics such as Americanah, Behold the Dreamers, and The Brief Wondrous Life of Oscar Wao, a funny, poignant, and insightful debut novel that explores the complexities of family, immigration, prejudice, and the American Dream through meaningful and unlikely friendships forged in unusual circumstances.

Pival Sengupta has done something she never expected: she has booked a trip with the First Class India USA Destination Vacation Tour Company. But unlike other upper-class Indians on a foreign holiday, the recently widowed Pival is not interested in sightseeing. She is traveling thousands of miles from Kolkota to New York on a cross-country journey to California, where she hopes to uncover the truth about her beloved son, Rahi. A year ago Rahi devastated his very traditional parents when he told them he was gay. Then, Pival’s husband, Ram, told her that their son had died suddenly—heartbreaking news she still refuses to accept. Now, with Ram gone, she is going to America to find Rahi, alive and whole or dead and gone, and come to terms with her own life.

Arriving in New York, the tour proves to be more complicated than anticipated. Planned by the company’s indefatigable owner, Ronnie Munshi—a hard-working immigrant and entrepreneur hungry for his own taste of the American dream—it is a work of haphazard improvisation. Pival’s guide is the company’s new hire, the guileless and wonderfully resourceful Satya, who has been in America for one year—and has never actually left the five boroughs. For modesty’s sake Pival and Satya will be accompanied by Rebecca Elliot, an aspiring young actress. Eager for a paying gig, she’s along for the ride, because how hard can a two-week “working” vacation traveling across America be?

Slowly making her way from coast to coast with her unlikely companions, Pival finds that her understanding of her son—and her hopes of a reunion with him—are challenged by her growing knowledge of his adoptive country. As the bonds between this odd trio deepens, Pival, Satya, and Rebecca learn to see America—and themselves—in different and profound new ways.

A bittersweet and bighearted tale of forgiveness, hope, and acceptance, America for Beginners illuminates the unexpected enchantments life can hold, and reminds us that our most precious connections aren’t always the ones we seek.

Leah Franqui is a graduate of Yale University and received an MFA at NYU-Tisch. She is a playwright and the recipient of the 2013 Goldberg Playwriting Award, and also wrote a web series for which she received the Alfred Sloan Foundation Screenwriting award (aftereverafterwebseries.com). A Puerto Rican-Jewish Philadelphia native, Franqui lives with her Kolkata-born husband in Mumbai. AMERICA FOR BEGINNERS is her first novel.

This book opens with Pival, a widow being basically browbeaten by her maids. She lives in India and instead of following the customs expected of her she has booked a trip to America – alone. Her maids are wailing that she will be attacked and never come home to them. They don’t know why she wants to make the trip. To them she is the quiet mouse the master married.

But there is more to Pival than they know. They did not know her when she was young and vibrant. All her vitality was worn away by a husband who expected perfection and allowed for not a single wrong step. From her or their son. Their son who went to America and then told them he was in love with a man. Her husband disowned him, never talked to him again and didn’t allow Pival to either. Then he told her he was dead.

Pival has decided to go to America to learn about the country that stole her son. She wants to find the man that “perverted” him and she needs to know if he really is dead. So she books her trip with a bit of a con man. He promises her a real Indian guide and a companion as she does not want to be alone with a man that is not her husband. These three unlikely people will embark on a cross country trip that will change all of their lives.

The young guide and the actress hired to be her companion are both dealing with issues as they embark on the trip. These three strangers from three disparate backgrounds somehow manage to travel and learn together. After they reach the West Coast each goes back to their life changed and I would say invigorated.

I was fascinated with this book. The characters were intriguing and compelling. Each one had depth and nuance. I felt for Pival – she was a force until this man she married destroyed all she was until she was just a shell of her former self. But then she found a small step back and another and another. The book held so much sadness yet so much hope too. There was love and laughter, happiness and pain. It was a book about life. It’s not the type of book you can just breeze through – it requires your attention but it is attention worth giving. Ms. Franqui is an author I’d very much like to read again.