I must admit to ignorance about Consuelo Vanderbilt prior to my reading of American Duchess by Karen Harper. I thank TLC Book Tours for sending me a copy at no charge for my honest review. 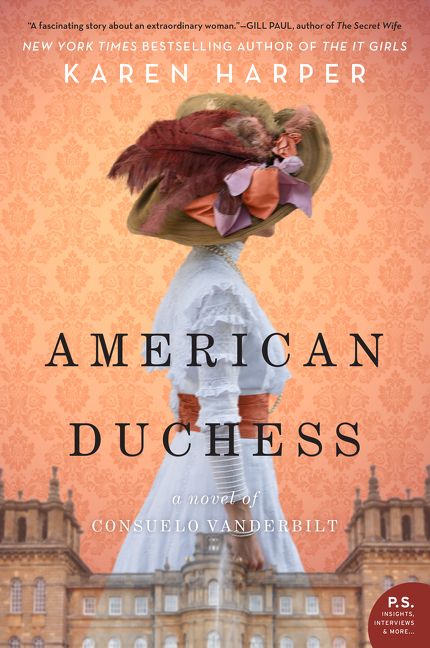 Before there was Meghan Markle, there was Consuelo Vanderbilt, the original American Duchess.  Perfect for readers of Jennifer Robson and lovers of Downton Abbey.

Karen Harper tells the tale of Consuelo Vanderbilt, her “The Wedding of the Century” to the Duke of Marlborough, and her quest to find meaning behind “the glitter and the gold.”

On a cold November day in 1895, a carriage approaches St Thomas Episcopal Church on New York City’s Fifth Avenue. Massive crowds surge forward, awaiting their glimpse of heiress Consuelo Vanderbilt. Just 18, the beautiful bride has not only arrived late, but in tears, yet her marriage to the aloof Duke of Marlborough proceeds. Bullied into the wedding by her indomitable mother, Alva, Consuelo loves another. But a deal was made, trading some of the vast Vanderbilt wealth for a title and prestige, and Consuelo, bred to obey, realizes she must make the best of things.

At Blenheim Palace, Consuelo is confronted with an overwhelming list of duties, including producing an “heir and a spare,” but her relationship with the duke quickly disintegrates. Consuelo finds an inner strength, charming everyone from debutantes to diplomats including Winston Churchill, as she fights for women’s suffrage. And when she takes a scandalous leap, can she hope to attain love at last…?

From the dawning of the opulent Gilded Age, to the battles of the Second World War, American Duchess is a riveting tale of one woman’s quest to attain independence—at any price.

New York Times and USA Today bestselling author KAREN HARPER is a former Ohio State University instructor and high school English teacher. Published since 1982, she writes contemporary suspense and historical novels about real British women. Two of her recent Tudor-era books were bestsellers in the UK and Russia. Harper won the Mary Higgins Clark Award for Dark Angel, and her novel Shattered Secrets was judged one of the best books of the year by Suspense Magazine.

I love learning about different aspects of history, whether they be important events or just about different people through time. I knew absolutely nothing about Consuelo Vanderbilt going into my reading of this book so it was exciting to be introduced to this tiny tidbit of American/English history.

Consuelo is the daughter of an overbearing mother and a very, very rich father. Her mother is determined that her daughter will marry well and to that end she takes her on a tour of Europe in search of a title.  She finds her one in the Duke of Marlborough who needs a wife with money to save his family’s estate, Blenheim Palace – the only castle not owned by the Crown.

Consuelo does not want to marry the Duke as she believes herself to be in love with another man but her mother is determined. So therefore the marriage goes forward and soon Consuelo finds herself as the ninth Duchess of Marlborough. She moves into Blenheim and soon brings some American thinking to the staid English estate. In time she becomes known for her kindness.

The book explores the life of Consuelo as she changes from innocent young heiress to a woman running from the German invasion of France in WWII and beyond. It’s not like I can spoil plot as Consuelo’s life if part of the historical record but I suspect that many are like me and don’t know much about her.

This was an easy reading book that I read in one long afternoon. I was really rooting for Consuelo because I really had a hard time with her mother. Talk about a social climber – whew! There was a lot of time and material to cover and at times I felt it went a bit too quickly but Ms. Harper did keep the book focused on Consuelo throughout. It is definitely her story. I would like to learn more about her after reading this as I feel there is more to know. Consuelo did write an autobiography and I think it would be quite interesting to read.

The period after WWI did find a number of titled Englishmen seeking rich wives to help rebuild/maintain estates that had been in their families for generations. England had been decimated by the war and many of the old families were hurting for money. The US was humming along and there was a lot of money to be found. It’s interesting to learn about this period in history.