I saw a blurb for American Fire by Monica Hesse in Entertainment Weekly as I was watching the mountain across the river burn this summer. While my fire wasn’t arson there was something about the book that resonated with me and I bought a copy. I just now got around to reading it. 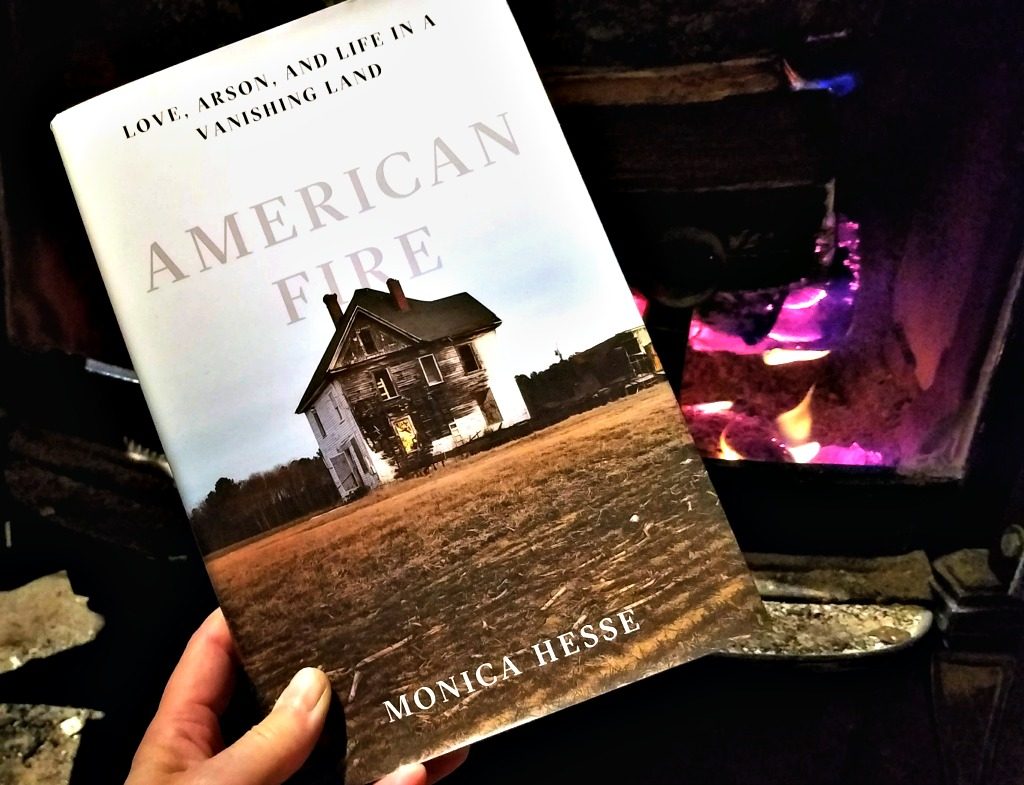 The arsons started on a cold November midnight and didn’t stop for months. Night after night, the people of Accomack County waited to see which building would burn down next, regarding each other at first with compassion, and later suspicion. Vigilante groups sprang up, patrolling the rural Virginia coast with cameras and camouflage. Volunteer firefighters slept at their stations. The arsonist seemed to target abandoned buildings, but local police were stretched too thin to surveil them all. Accomack was desolate―there were hundreds of abandoned buildings. And by the dozen they were burning.

The culprit, and the path that led to these crimes, is a story of twenty-first century America. Washington Post reporter Monica Hesse first drove down to the reeling county to cover a hearing for Charlie Smith, a struggling mechanic who upon his capture had promptly pleaded guilty to sixty-seven counts of arson. But as Charlie’s confession unspooled, it got deeper and weirder. He wasn’t lighting fires alone; his crimes were galvanized by a surprising love story. Over a year of investigating, Hesse uncovered the motives of Charlie and his accomplice, girlfriend Tonya Bundick, a woman of steel-like strength and an inscrutable past. Theirs was a love built on impossibly tight budgets and simple pleasures. They were each other’s inspiration and escape…until they weren’t.

Though it’s hard to believe today, one hundred years ago Accomack was the richest rural county in the nation. Slowly it’s been drained of its industry―agriculture―as well as its wealth and population. In an already remote region, limited employment options offer little in the way of opportunity. A mesmerizing and crucial panorama with nationwide implications, American Fire asks what happens when a community gets left behind. Hesse brings to life the Eastern Shore and its inhabitants, battling a punishing economy and increasingly terrified by a string of fires they could not explain. The result evokes the soul of rural America―a land half gutted before the fires even began.

Monica Hesse is the national bestselling author of the true crime love story American Fire and the Edgar Award-winning young adult historical mystery novel Girl in the Blue Coat, which has been translated into a dozen languages and was shortlisted for the American Booksellers Association’s Indies Choice Award. She is a feature writer for the Washington Post, where she has covered royal weddings, dog shows, political campaigns, Academy Awards ceremonies, White House state dinners, and some events that felt like a mixture of all of the above. She has talked about these stories, and other things, on NBC, MSNBC, CNN, CSPAN, FOX and NPR. She has been a winner of the Society for Feature Journalism’s Narrative Storytelling award, and a finalist for a Livingston Award and a James Beard Award. Monica lives in Maryland. with her husband and a brainiac dog.

Fire is also scary. Whether it’s a forest fire or a house fire it has the capacity to really make a person fearful. I remember standing in my living room watching the fire burn the mountainside across the river. My husband spent the days outside, wearing a mask against the smoke, prepping our property in case the embers started flying and caused the fire to jump the river.

Imagine living in a small community that has perhaps seen its best times but continues to struggle along and suddenly houses start burning. Sometimes two and three a night. You don’t know where the next fire is going to be. Is the wind is going to whip up and cause the fire to blow an ember into your yard and start your house on fire? Will I go to sleep only to be awakened by sirens yet again?

Worse, you are one of the volunteer firemen. Do you realize that most of the country gets its fire response from volunteers? Many of those fire companies are struggling as the young people move out of rural areas and the population ages. So again imagine those volunteer fire companies, with men and women who also have to work having to go out night after night to put out one, two or three fires.

This went on for around 5 months. The area lived in a state of tension as neighbors wondered, police wondered and the FBI wondered who could be setting the fires. The area is very rural, the houses were mostly abandoned; they authorities tried to predict where the arsonist would strike but there were just too many possible targets. Until one night they got lucky.

Ms. Hesse writes in a very compelling manner. Her book started with a feature for The Washington Post where she is a feature writer. She instructs her reader in the economic conditions of the Eastern Shore of Virginia, about the various types of psychiatric conditions that could lead to someone becoming and arsonist and on areas of fire science and at no time do you feel overwhelmed or bored.

I am not spilling beans by telling you there are two arsonists – a couple – as it is disclosed in the synopsis. The information is given in the opening of the book so you know from the outset who is committing the arson fires. The male, Charlie is deeply profiled and you really get to know him as the pages turn. The woman, Tonya is more of an enigma. She did not make herself available to Ms. Hesse as broadly as Charlie did so this does leave you with some questions at the end. If you have a person that refuses to answer the questions it is just going to leave some things hanging. Such is the problem with real life.

I read this in one sitting. I did find it utterly fascinating. Now, I do live with a fireman and he’s been answering calls for the entirety of our marriage so I am sure that played a role. Not to mention all of those flames this summer.

As I wrote, fire is fascinating.