I have read all of Stephanie Thornton’s historical novels about strong women and thoroughly enjoyed them. When offered the opportunity to read her latest, American Princess I of course said yes. I thank the publisher for sending me a copy at no charge for my honest review. 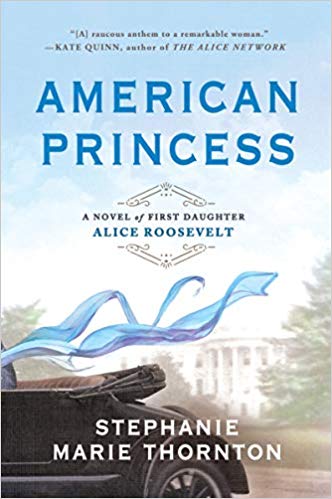 Alice may be the president’s daughter, but she’s nobody’s darling. As bold as her signature color Alice Blue, the gum-chewing, cigarette-smoking, poker-playing First Daughter discovers that the only way for a woman to stand out in Washington is to make waves–oceans of them. With the canny sophistication of the savviest politician on the Hill, Alice uses her celebrity to her advantage, testing the limits of her power and the seductive thrill of political entanglements.

But Washington, DC is rife with heartaches and betrayals, and when Alice falls hard for a smooth-talking congressman it will take everything this rebel has to emerge triumphant and claim her place as an American icon. As Alice soldiers through the devastation of two world wars and brazens out a cutting feud with her famous Roosevelt cousins, it’s no wonder everyone in the capital refers to her as the Other Washington Monument–and Alice intends to outlast them all.

Stephanie Thornton is a writer and history teacher who has been obsessed with women from history since she was twelve. She lives with her husband and daughter in Alaska, where she is at work on her next novel. Visit her website at www.stephaniethorntonauthor.com.

Alice Roosevelt is the first child of Theodore and after he assumes the presidency after the assassination of President McKinley she becomes a media darling (of the time) and is given the title of American Princess. This book novelizes her life but as the author’s note at the end shares, many of the more outrageous tales about Alice are the ones that truly happened.

We meet Alice as an old woman about to face her second mastectomy. She then proceeds to take the reader through the events of her world starting when she was 17. She was always a bright and witty girl and as much as her step mother tried to reign her in she was always originally Alice.

This was a fascinating read; I knew nothing about Alice Roosevelt and it seems that was my loss. It seems like she was both a bit of a hellion and a real force of nature. I suspect she would have been truly thrilling to know. While the book is also a passage through the history of the time, it is Alice’s story.

Ms. Thornton shows the changing politics of Washington (and in some cases the world) through the eyes and ears of this woman who became know as the other Washington Monument. Her father was a President, her husband was a Speaker of the House, her cousin another President. She was a very connected woman. Alice made the effort to stay on top of the news of the day and the political scene. She used her knowledge to bring people together and was an institution in the District.

I thoroughly enjoyed learning about this bright, intelligent woman. Alice’s story is one of family, politics, love, hate, passion and strength. It was hard to put down and I know I’m going to want to read more about this amazing woman.