An Appetite for Violets by Martine Bailey – Book Review 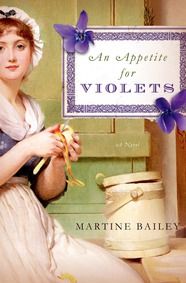 “That’s how it is for us servants. No one pays you much heed; mostly you’re invisible as furniture. Yet you overhear a conversation here, and add a little gossip there. Then you find something, something you should not have found.”

Irrepressible Biddy Leigh, under-cook at forbidding Mawton Hall, only wants to marry her childhood sweetheart and set up her own tavern. But when her elderly master marries young Lady Carinna, Biddy is unwittingly swept up in a world of scheming, secrets, and lies. Forced to accompany her new mistress to Italy, she documents her adventures and culinary discoveries in an old household book of recipes, The Cook’s Jewel. Biddy grows intrigued by her fellow travelers, but her secretive and unconventional mistress is the most intriguing of all.

In London, Biddy finds herself attracted to her mistress’s younger brother. In France, she discovers her mistress’s dark secret. At last in Italy, Biddy becomes embroiled in a murderous conspiracy, knowing the secrets she holds could be a key to a better life, or her downfall.

Inspired by eighteenth-century household books of recipes and set at the time of the invention of the first restaurants, An Appetite for Violets is a literary feast for lovers of historical fiction. Martine Bailey’s novel opens a window into the fascinating lives of servants, while also delivering a suspenseful tale of obsession and betrayal.

Biddy (Obedience) Leigh is the undercook at Mawton Hall and wants only to marry her sweetheart Jem and start a tavern of her own. She is a forward thinking woman for her time and one with a rare talent for cooking. Life, however does not always turn out the way we want it to as Biddy soon learns. The new mistress of the house, Carinna suddenly arrives and soon Biddy’s careful plans for the future are all turned upside down.

Carinna suddenly feels the need to embark on a trip to Italy for her health and insists that Biddy accompany her. Also on the trip – Carinna’s lady’s maid. her footman (a slave yearning to go back to his homeland) and Mr. Parr, the head man at Mawton Hall. Biddy does not want to go as she knows that if she leaves she won’t be able to keep Jem’s eye (and other parts of his body) from wandering but Mr. Parr gives her no choice. Lady Carinna is also most insistent that Biddy accompany her to Italy much to her maid’s ire. Along the way Lady Carinna starts to teach Biddy how to act like a noblewoman and how to speak French and Italian. Biddy is a startling good mimic and she learns quickly.

Along the way Biddy learns more about cooking and adds to her receipt (recipe) collection. Before she left her good friend Mrs. Gardiner gave her a book called The Cook’s Jewel that contained the wisdom of the ladies of Mawton Hall for generations. Mrs. Gardiner encouraged Biddy to add to it and to learn about other ways of cooking to advance her talents. While in France Biddy learns about new concepts in serving people and she also develops a deeper relationship with Lady Carinna’s brother, Kit.

After the group arrives in Italy all of the reasons for Lady Carinna teaching Biddy what she did come to light and it sets everyone there on a new path in life – some to good, some to bad. To write much more will spoil the plot.

I really enjoyed this book and loved the character of Biddy; she was very bright yet true to her time and her class. Of course I enjoyed the food aspects that were woven throughout the tale. There are recipes from the period included at the start of each chapter and they are fascinating to read. Not all of the characters are all well developed as Biddy but for the most part the ones that need to be are and the ones that just appear here and there are sufficiently fleshed out to serve their purposes. There are a lot of twists and I’ll tell you the final one really caught me by surprise. I just about gasped out loud. There are plot points that seem arbitrary and some aspects that seem unnecessary but all in all this was a really fun and engaging read.