I received a free copy of An Incurable Insanity for my honest review. I received no other compensation for this post. 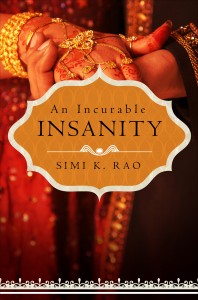 Print Length: 376 pages
Publisher: Tate Publishing (October 8, 2013)
Her heart fluttered when she heard the sound of the key turn in the lock. She quickly adjusted her maroon silk sari with the yellow border, the one that had caught his eye, and waited eagerly for his footsteps.
One, two, three, four, five, six, seven… Yes, exactly seven steps before he stopped, hesitated for a few moments, then removed his shoes one by one and arranged them neatly side by side on the shoe rack.
She smiled. He had been mindful of taking his shoes off every day now. “I am not used to it, but I will if you want me to. It’s probably a good thing to do anyway.”
As he settled down, he would pick up the TV remote and, without looking at her, would say in his smooth baritone, “So how did you spend your day, anything interesting?”
Shaan Ahuja found himself bowing to tradition and agreeing to an arranged marriage to the beautiful Ruhi Sharma. He went through the motions but had no intention of carrying through on his vows. His last foray into matters of the heart with an American girl had left him scarred and unwilling to try again. Thoroughly disillusioned and disgruntled he wasted no time in making his intentions clear to Ruhi on their wedding night. But, he was completely unprepared for what his new wife had in mind.

Simi K. Rao was born in India and has been living in the United States for several years. This book is her first foray into writing. The inspiration for the story came from what she has seen transpire among and within the immigrant community. Some of the experiences included are her own; some have been garnered from friends and casual conversations with acquaintances. She also writes poetry, is an avid photographer, loves to travel, and is a practicing physician. She currently lives in Denver with her family.
Connect with Simi on her website, Twitter, Facebook and Goodreads.

An Incurable Insanity is the tale of Ruhi and Shaan, two young people in an arranged marriage. Ruhi enters into it full of the hopes and dreams of any bride. Shaan enters into it because of familial pressures; his grandfather is dying and he wants to see Shaan settled before he dies. Shaan thinks nothing of marrying a girl and then telling her he is love with someone else – goodbye. He gives no consideration to the fate of a woman in that position in his culture. To be honest – he is a selfish son of a bitch.

Ruhi refuses to give up though, she asks him for just two months so that she can go back and tell her parents that at least she tried. She plans to make him love her in spite of his lover. But Shaan refuses to be loved even when he realizes that he was being used by the other woman. Just as he realizes that he has a good thing in Ruhi she turns on him.

As I started this book I thought I was going to love it. By the time I hit about a third of the way through it I wanted to throw the book in the river. None of the behaviors made any sense on any level and I don’t think it has anything to do with cultural differences. The characters were thinking one thing (written in italics) and saying another. I love you/I hate you/I don’t want you/I want you/Stay/Go. Aaaaargh! There were little subplots about friends and building spaceships that did little to engage me.

Maybe if I were younger. I don’t know. Too much drama, too much angst not enough substance. Talk to each people. TALK, don’t think it in italics.

You can see the An Incurable Insanity Tour Schedule

You can preorder An Incurable Insanity on Amazon.com (releases 10/8/13)

One lucky reader will win a copy of An Incurable Insanity; if the winner is from the US he/she can choose either a hardback or Kindle version. A winner living outside of the US will receive a Kindle version.

Disclosure:  I received a free copy of An Incurable Insanity for my honest review. I received no other compensation for this post.