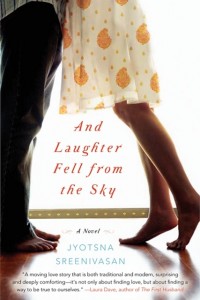 • Paperback:336 pages
• Publisher: William Morrow Paperbacks (June 19, 2012)
Still living at home despite a good career and financial independence, beautiful and sophisticated Rasika has always been the dutiful daughter. With her twenty-sixth birthday fast approaching, she agrees to an arranged marriage, all while trying to hide from her family her occasional dalliances with other men.
Abhay is everything an Indian-American son shouldn’t be. Having spent his postcollege years living in a commune, he now hops from one dead-end job to another, brooding over what he really wants to do with his life.
Old family friends, Rasika and Abhay seem to have nothing in common, yet when the two reconnect by chance, sparks immediately fly. Abhay loves Rasika, but he knows her family would never approve. Rasika reluctantly accepts she has feelings for Abhay, but can she turn her back on the family rules she has always tried so hard to live by? The search to find answers takes Abhay and Rasika out of their native Ohio to Oregon and India, where they find that what they have together might just be something worth fighting for.

The daughter of Indian immigrants, Jyotsna Sreenivasan was born and raised in Ohio. Her short fiction has appeared in numerous literary magazines and she has received literature grants from the Washington, D.C., Commission on the Arts and Humanities. The author of several nonfiction books published by academic presses and the creator of the online Gender Equality Bookstore, she lives in Moscow, Idaho, with her family. This is her first novel.
Website | Facebook | Twitter
Jyotsna will discuss And Laughter Fell From the Sky on Book Club Girl on Air on Wednesday, July 18th at 7 pm ET.


I love a book where I can be entertained and learn something at the same time. I knew very little about Indian culture when I started and now I feel as if I have lived with a family for a bit as the story takes place in an Indian-American household where the daughter, Rasika, while born in India is really quite American in her thoughts and ideas.  Her deepest wish is to be appreciated for her style and glamour; does it get any MORE American than that? She is reaching the age where her horoscope says it’s ideal for her to marry so despite her feelings she is agreeing to an arranged marriage to maintain her image as a good daughter. But she manages to somehow destroy any match brought to her.


Her childhood friend is also removed from what is expected from him by his family. He is very smart yet cannot decide on what he wants to be. He floats through life like a lost frat boy/hippy type with no real purpose. The complete opposite of Rasika with her banking job and glamorous aspirations. But opposites attract, don’t they?


It takes a while and a rather contrived and rushed ending to get these two together but they do overcome various familial objections to realize that perhaps they are meant for each other. It was  a quick and easy to read book that took some odd detours along the way to the ending. Our hero seems to have a thing for women that can’t or won’t be monogamous so one must wonder what he sees in Rasika unless it is her penchant for hotel rendezvous with various men.


So I guess I am a bit mixed on this one; I did enjoy reading it but when I stop to think about it I wonder why.


You can purchase And Laughter Fell from the Sky on Amazon.com

Disclosure:  I received a copy of And Laughter Fell from the Sky gratis from TLC Book Tours. Any opinions expressed are my honest opinions and were not impacted by my receipt of the free book. I received no monetary compensation for this post.