Wallis Simpson is a woman that people either love or hate. Another Woman’s Husband by Gill Paul explores the relationship between the woman who became the Duchess of Windsor and her oldest friend. I thank TLC Book Tours for sending me a copy at no charge for my honest review. 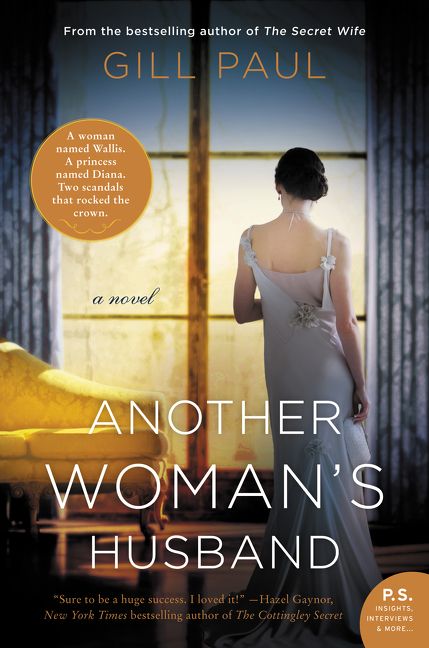 About Another Woman’s Husband:

As the world mourns the loss of Diana, Princess of Wales, one young woman uncovers a forgotten story of passion, betrayal, and a scandal surrounding the British crown in this unforgettable novel by the bestselling author of The Secret Wife.

Two women who challenged the Crown.

Divided by time. Bound by a secret…

1911: When fifteen-year-old Mary Kirk meets Wallis Warfield at summer camp, she’s immediately captivated by her fearless, brazen, and self-assured personality. And Wallis has a way with the boys who are drawn to her like moths to a flame. Though Mary’s family isn’t crazy about her new best friend, she steadfastly stands by her side—even years later when they’re adults and rumors swirl about Wallis and her reckless behavior with none other than the Prince of Wales. But when Mary’s loyalty to Wallis comes into question, their friendship will be put to the ultimate test.

1997: After a romantic proposal in Paris, Rachel and her fiancé Alex are in a cab when suddenly the car ahead crashes. They’re stunned to learn Princess Diana is in the car. By the wreckage, Alex finds a heart pendant with an engraved letter “J” and Roman numerals XVII and gives it to Rachel to hold. Haunted by the crash and Diana’s subsequent death, Rachel is intrigued when she discovers that Di had visited the last home of Wallis, the Duchess of Windsor, only hours before the accident. Eventually, the revelation of a long-forgotten link to Wallis Simpson leads

You can purchase Another Woman’s Husband at Harper Collins

Gill Paul’s novels include the USA Today bestseller The Secret Wife; Women and Children First, which was short-listed for a Romantic Novelists’ Association award; The Affair; and No Place for a Lady, which was short-listed for a Love Stories award. Her nonfiction includes A History of Medicine in 50 Objects, World War I Love Stories, and Royal Love Stories. Gill’s expertise is often called upon for talks on historical subjects, including the sinking of the Titanic.

It seems quite popular lately in fiction to write a story with dual timelines with something connecting the two whether it be a book, a piece of jewelry or a castle. In Another Woman’s Husband the connection is a visit that Diana paid to Windsor Villa just outside of Paris on the day she died. That and a small platinum bracelet.

The chapters that dealt with the life of Wallis Simpson were far more interesting to me than the ones that took place in the more modern era – although Diana did die 21 years ago so that is certainly “historical.” Just not enough so for me. It’s still just a little too much a part of my reality. This preference for the older sections is typical for me.

I found the story of Wallis and her long time friend, Mary fascinating. This was a friendship forged early in their lives that stayed strong – as long as Mary performed her role and didn’t take from Wallis. Only Wallis could take and shine. As I noted above, people tend to have very strong feelings about Wallis – I for one don’t think very highly of her and this book did nothing to change my opinion. If anything it solidified it.

The story that takes place in the present about the relationship between Rachel and Alex was nothing extraordinary. In truth I found that much of it just didn’t ring true for me and I was just reading through to get to the parts about Wallis and Mary. That was what the book was for me. The relationship between these women was the driver of the story and what I wanted to read. The rest was fluff.

I am sure others will disagree with me and that is the beauty of reading. This book is delightful for the story of Wallis and Mary. Even if Wallis drove me to distraction – I expected that, she just is that kind of woman.

Share12
Pin46
Yum
Share
Email
What is Romanesco? and How To Freeze Romanesco
The Phantom Tree by Nicola Cornick – Blog Tour, Book Spotlight and Excerpt