I love when a book can lead me down a path of learning.  If anyone had asked me about Oak Ridge, TN, I would have said I’d heard of it and isn’t there a country band? I am so amazingly ignorant as to so many parts of this country’s history. The Atomic City Girls by Janet Beard enlightened me to one of them. Thank you TLC Book Tours for sending me a copy at no charge for my honest review. 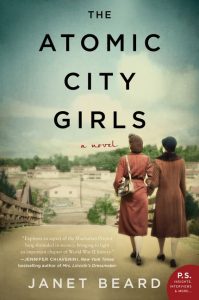 About The Atomic City Girls:

“Focuses on the little-known realities behind the Manhattan Project […] Readers who enjoyed Martha Hall Kelly’s Lilac Girls will appreciate this glimpse into the beliefs and attitudes that shaped America during World War II.”— Library Journal

In the bestselling tradition of Hidden Figures and The Wives of Los Alamos, comes this riveting novel of the everyday people who worked on the Manhattan Project during World War II.

In November 1944, eighteen-year-old June Walker boards an unmarked bus, destined for a city that doesn’t officially exist. Oak Ridge, Tennessee has sprung up in a matter of months—a town of trailers and segregated houses, 24-hour cafeterias, and constant security checks. There, June joins hundreds of other young girls operating massive machines whose purpose is never explained. They know they are helping to win the war, but must ask no questions and reveal nothing to outsiders.

The girls spend their evenings socializing and flirting with soldiers, scientists, and workmen at dances and movies, bowling alleys and canteens. June longs to know more about their top-secret assignment and begins an affair with Sam Cantor, the young Jewish physicist from New York who oversees the lab where she works and understands the end goal only too well, while her beautiful roommate Cici is on her own mission: to find a wealthy husband and escape her sharecropper roots. Across town, African-American construction worker Joe Brewer knows nothing of the government’s plans, only that his new job pays enough to make it worth leaving his family behind, at least for now. But a breach in security will intertwine his fate with June’s search for answers.

When the bombing of Hiroshima brings the truth about Oak Ridge into devastating focus, June must confront her ideals about loyalty, patriotism, and war itself.

The Atomic City Girls is available at Harper Collins

Born and raised in East Tennessee, Janet Beard earned an MFA in creative writing from The New School. She currently lives and writes in Columbus, Ohio.

I knew about the Manhattan Project and the goings on in the desert of New Mexico. Or at least what was taught to us in school and what I later read about in books. Who knows what really went on? What went on in Oak Ridge, Tennessee? Clueless. I will note that I am not a real student of American history – I have always been far more interested in the times that happened much earlier than the founding of this country. That being written, there are the tales like this one that open my eyes to our history and make me want to learn more.

The Atomic City Girls is a number of stories really; it’s a tale of patriotism, a tale of government overreach, a love story, and most of all a story of its time. I don’t suppose any of us living in the connected world we currently inhabit could begin to understand the fear and worry of the people living during World War II when news was not as available.

There is the tale of June, a young woman from the area who goes to work in Oak Ridge not fully understanding initially what she is doing there but knowing that the money is better than any other job available. Joe is a Negro family man who came to the complex to better his situation but the black men could not bring their families and live together. And they are paid at half the rate of the white men – but he is still encouraged because he will be able to put money aside for the first time. Finally there is Cici, all class and breeding – or is she. She claims to be there because she wants to support her country but her motives are less than pure.

There were a couple of additional side plots involving characters in the orbits of the three main story lines. Ms. Beard does a good job of weaving all of her ancillary characters but a few bits do get dropped leaving some unanswered questions. Some significant events happen off site as it were and are simply relayed in a couple of sentences which leaves the reader a bit deflated. The book also ended a bit rapidly for me – I would have liked a bit more of the post WWII life. Not chapters and chapters but maybe a few more pages.

Overall though, I did enjoy the book despite these minor complaints. I found myself quite involved in the story – especially June’s. It has made me want to learn more about what went on in Oak Ridge.