When It’s Over by Barbara Ridley – Book Review

Caitlin Hamilton Summie sent me a lovely package of books for review – she always sends me the most interesting books to read – and When It’s Over by Barbara Ridley is the first of the trio that was sent at no charge for my honest opinion. 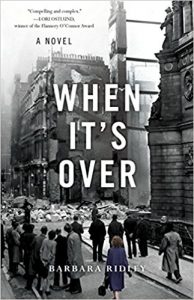 About When It’s Over:

Coming of age in Prague in the 1930s, Lena Kulkova is inspired by the left-wing activists who resist the rise of fascism. She meets Otto, a refugee from Hitler’s Germany, and follows him to Paris to work for the Republican side in the Spanish Civil War. As the war in Spain ends and a far greater war engulfs the continent, Lena gets stuck in Paris with no news from her Jewish family, including her beloved baby sister, left behind in Nazi-occupied Czechoslovakia. Otto, meanwhile, has fled to a village in England, and urges Lena to join him, but she can’t obtain a visa.

When Lena and Otto are finally reunited, the safe haven Lena has hoped for doesn’t last long. Their relationship becomes strained, and Lena is torn between her loyalty to Otto and her growing attraction to Milton, the son of the eccentric Lady of the Manor. As the war continues, she yearns to be reunited with her sister, while Milton is preoccupied with the political turmoil that leads to the landslide defeat of Churchill in the 1945 election.

Based on a true story, When It’s Over is a moving, resonant, and timely read about the lives of war refugees, dramatic political changes, and the importance of family, love, and hope.

Barbara Ridley was raised in England but has lived in California for more than thirty years. After a successful career as a nurse practitioner, which included publication in numerous professional journals, she is now focused on creative writing. Her work has appeared in literary journals, such as The Writers Workshop Review, Still Crazy, Ars Medica, The Copperfield Review, and BLYNKT. This is her first novel. Ridley lives in the San Francisco Bay Area with her partner and her dog, and has one adult daughter, of whom she is immensely proud. Find her online at www.barbararidley.com.

I keep breaking my promise to myself to not read any more WWII books. It is, I suppose, a very deep well to draw upon for story inspiration. When the tale you bring to life is based on your own family’s history it makes the telling all the more compelling. Such is the case of When It’s Over for Ms. Ridley as it is based on her parents’ lives.

The heroine of the story is Lena, a young Czech woman who feels strongly about what she learns is going in Spain with the rise of Fascism. As she and her friends go to protest meetings she encounters a young man named Otto who is far more involved in fighting the evil that is rising. Against her father’s wishes, Lena follows Otto to Paris as Hitler starts his march through Austria into Poland and beyond. As things worsen Otto gets a visa to England but Lena is stuck in Paris until something breaks and she finds her way to Otto. But England is not going to be the safe place they hoped it would be as the Blitz is just around the corner.

This is more than just another war story as it was so personal to the author. That deep meaning comes through in the character development and the feelings presented between the main characters – not just Lena and Otto, but the close circle of refugee friends and their English sponsors. The descriptions brought war time England to life which managed to ruin a couple of night’s sleep. So I am again swearing off WWII novels.

Ms. Ridley writes with power and conviction. Her research is deep – both the personal kind and the historical and it gives her reader an experience in reading that stays with them. I am still thinking about these characters and it’s been days since I turned the last page.

Share4
Tweet
Yum
Share
Pin3
Email
Barbara RidleyWhen It's Over
Why We Chose a Used Hybrid Car
Eco Friendly, Organic Cotton Towels for an Eco Friendly Yurt with a Giveaway