Anne Cleeland writes my favorite murder mystery series – the Doyle and Acton books but she also writes historical fiction. I was surprised and excited when she sent me her latest in the mail at no charge. Read on to learn about The Barbary Mark. 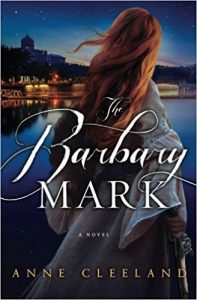 About The Barbary Mark:

After a shipwreck, Nonie Rafferty washes up on the shore of Algiers, where the slave traders look to sell the pretty Irishwoman—or worse. She must come up with a tale to save herself—and fast—before anyone discovers the true reason she sailed to this misbegotten corner of the world, or the true reason she was wearing a priceless strand of pearls, when she was rescued. Fortunately, the Dey’s mysterious necromancer appears willing to come to her aid, and what follows is a cat-and-mouse game of deception, attraction, and above all, redemption.

I’ve written many a time before that Ms. Cleeland is one of my favorite authors. I am supremely fond of her Doyle and Acton series and I have also read several of her historical fiction titles. Her irreverent female characters strike a chord with me. They are similar but not cookie cutter. In The Barbary Mark our heroine, Nonie Rafferty works for a clandestine network spying for the British government endeavoring to defeat Napoleon. But if discovered she knows that no one other than her partner will be there to help her. The government will not admit she exists.

Nonie is now a prisoner of sorts of the Dey of Algiers and is in the control of the mysterious and powerful necromancer. She has a job to do but there is something about the man that distracts her in a way she does not want to be distracted. She feels he is on her side but perhaps not working for the same end.

The book is full of twists and turns which is a hallmark of all of Ms. Cleeland’s books. You might think you know what is going to happen but sometimes it does and sometimes it doesn’t. That is what is so much a part of the joy of reading these books. In the case of this book Nonie is probably a little more forward than a woman of her time should be and some bits of plot strain credulity but if you just let yourself go with the story you will be rewarded with a great read.

The main characters are unique and their stories roll out slowly so that  you learn what motivates them to do what they do. Except for one – the necromancer remained a bit of a mystery and perhaps that is intentional. Is there a sequel coming? I don’t know. I would surely enjoy one that’s for sure.

Murder in All Honour