I am delighted to welcome Margot Hunt today with an excerpt from her new book, Best Friends Forever. Ms. Hunt is currently touring with TLC Book Tours and you can follow along. There are two parts to the tour; first are the excerpts and then come the reviews. You will find all of the dates for both parts by going to the Best Friends Forever Tour Schedule 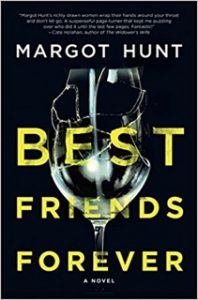 IMAGINE YOU’RE SHIPWRECKED on an island inhabited by only Knights and Knaves. Knights always tell the truth. Knaves always lie. There is no way to distinguish between the two just by looking at them. The only way to separate the liars from the truth-tellers is by asking them questions. For example, suppose you encounter two islanders. Let’s call them A and B. You ask A, “Are you a Knight or a Knave?” A responds by saying, “At least one of us is a Knave.” B is silent. Who is a Knight and who is a Knave?

The answer is easy. A cannot be a Knave, because if so, his statement would be truthful, and Knaves always lie. Therefore A must be a Knight, and telling the truth. Which would mean B is a Knave. In real life, of course, there are no such things as Knights, those absolute keepers of the truth. Everyone lies about something.

“When would you like me to come in?” I asked.
“As soon as possible,” Oliver snapped. In contrast to her colleague, she didn’t seem at all sheepish about appearing on my doorstep before 8AM and disrupting our routine. “In fact, we’d like you to come with us now.” I was currently wearing a ratty old T-shirt of Todd’s and a pair of jogging shorts. I’d never put much thought into what one wore to a police interview, but I was fairly sure this was not the ideal outfit. “Where is the Jupiter Island Public Safety Department located?” I asked, wondering why it couldn’t just be called a police department. Was that somehow offensive to the extremely wealthy residents of Jupiter Island? Were police necessary only for regular citizens?

The marked differences between the very rich and everyone else reared up at the oddest times, even in our so-called equal society. “On Bunker Hill Road in the old town hall building,” Oliver said. I mentally calculated how long it would take me to get the kids off to school, get dressed and drive there. “I could be there in two hours.” The police officers exchanged a look, but Demer nodded.

“We’ll see you then,” he said. Once the front door was closed and we were alone again, my husband looked anxiously at me. “What’s going on? Why do the police want to talk to you?” Todd hissed, keeping his voice low so Liam and Bridget wouldn’t hear. Children have superhuman hearing when it comes to picking up on any brewing parental conflict. “I have no idea,” I said. “But Howard’s death was…odd.”

An understatement, to say the least. “I’m sure they have to investigate. Make sure there wasn’t any…I don’t know, foul play.” Foul play. It was such a melodramatic phrase, like some- thing out of an Agatha Christie novel. Murderous vicars and little old ladies who put arsenic in the tea. “But why do they think you’d know anything about it?” “I’m sure they don’t.” I shrugged. “But they obviously know that Kat and I are friends.” “I don’t think you should speak to the police without having an attorney present.”

“What? Why? I’m not a suspect,” I said. “How do you know?” “Because that would be insane,” I said. I shook my head. “Look, I’m sure they have to investigate, even when the death was clearly accidental. It’s certainly nothing to worry about.” “Then why are the police at our door at eight in the morning,” Todd pointed out. “I have no idea, but there’s no reason to overreact,” I said, turning away. “I have to go check on the kids. If I don’t pay attention, Liam eats all the toast and none of his eggs, and Bridget doesn’t eat anything at all.”

My husband grabbed my arm and spun me back toward him. He leaned forward, his face close to mine, and whispered, “What’s going on? Did Kat have something to do with Howard’s death?” His breath was hot and smelled of coffee. I pulled my arm out of his grip and took a step back. “Don’t be ridiculous. Of course she didn’t.”

Todd wasn’t sure if he should believe me. I could tell by the way he was searching my face, looking for some trace of a lie in the way I blinked my eyes or clenched my jaw. Like a visitor to the island of Knights and Knaves, Todd wanted to try his hand at ferreting out the liars. I felt a stab of fear and hoped I was more convincing when I spoke to the police.

Kat Grant and Alice Campbell have a friendship forged in shared confidences and long lunches lubricated by expensive wine. Though they’re very different women—the artsy socialite and the struggling suburbanite—they’re each other’s rocks. But even rocks crumble under pressure. Like when Kat’s financier husband, Howard, plunges to his death from the second-floor balcony of their South Florida mansion.

Howard was a jerk, a drunk, a bully and, police say, a murder victim. The questions begin piling up. Like why Kat has suddenly gone dark: no calls, no texts and no chance her wealthy family will let Alice see her. Why investigators are looking so hard in Alice’s direction. Who stands to get hurt next. And who is the cool liar—the masterful manipulator behind it all.

Margot Hunt is the pseudonym of a bestselling writer of twelve previous novels. Her work has been praised by Publisher’s Weekly, Booklist and Kirkus Reviews. BEST FRIENDS FOREVER is her first psychological thriller.

One lucky US reader will win a copy of Best Friends Forever. Just enter as many ways as you would like on the Gleam widget below. Full rules are on the widget. Good luck everyone.
Margot Hunt