I have enjoyed several of the Shinobi Mystery series by Susan Spann and was therefore thrilled to be asked to review the latest in the series, Betrayal at Iga thanks to TLC Book Tours. I was sent a copy at no charge. 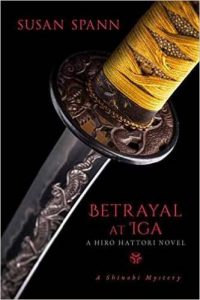 About Betrayal at Iga:

Autumn, 1565: After fleeing Kyoto, master ninja Hiro Hattori and Portuguese Jesuit Father Mateo take refuge with Hiro’s ninja clan in the mountains of Iga province. But when an ambassador from the rival Koga clan is murdered during peace negotiations, Hiro and Father Mateo must find the killer in time to prevent a war between the ninja clans.

With every suspect a trained assassin, and the evidence incriminating not only Hiro’s commander, the infamous ninja Hattori Hanzo, but also Hiro’s mother and his former lover, the detectives must struggle to find the truth in a village where deceit is a cultivated art. As tensions rise, the killer strikes again, and Hiro finds himself forced to choose between his family and his honor.

This is my fourth book with Hiro Hattori and Father Mateo and hopefully not my last. I don’t read a lot of murder mysteries any more – I like my sleep and I find that thrillers, murders, et al keep me awake at night. There is something almost gentle in the way these books handle the gruesome topic of murder. At any rate it allows for a restful night’s sleep if I don’t get the book read in the course of a day. In the case of Betrayal at Iga I did read it in one afternoon so there was no fear of a restless sleep no matter what.

In this installment Hiro finds himself back where he began which causes many problems for him above and beyond the inevitable murder(s) that need solving. I’m not spoiling anything but offering up the existence of murder for it wouldn’t be a Shinobi Mystery without at least one.

The investigation of the murders this time is particularly delicate as the dead were part of a visiting delegation who were visiting to negotiate between the clans. There are secrets and lies swirling everywhere and Hiro must navigate within his family of trained assassins who just may be responsible for the deaths. He also is meeting his first love for the first time since she betrayed him. He must stay focused to sort out the clues and to keep Father Mateo from breaking Japanese protocol in a place that is about as rigid as it gets.

I did enjoy this book – I think it’s my favorite of the four I have read. Hiro is less rigid in a place where he really should be most controlled and Father Mateo is his usual self. The addition of family pressures adds to the strain and pressure of trying to solve murders that could have lasting impacts on their country. These two characters and their loyal maid/cook/cat keeper are a wonderful group of crime fighters using what we might call forensics at a time when the word hasn’t even entered the lexicon. The book is a page turner that keeps the reader guessing. It does easily stand alone but as with any series it is richer reading with the knowledge that comes with having read the earlier books.