I received a free copy of Beyond Derrynane from Historical Fiction Virtual Book Tours for my honest review. 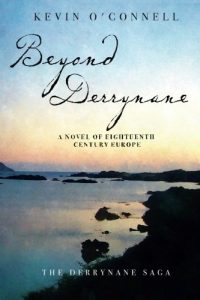 Wed in an arranged marriage to a man nearly fifty years her senior, sixteen-year-old Eileen O’Connell goes from being one of five unmarried sisters to become the mistress of Ballyhar, the great estate of John O’Connor, one of the wealthiest and most influential men in Ireland.

When O’Connor dies suddenly seven months into their marriage, Eileen must decide whether she will fulfill her brother’s strategic goals for her family by marrying her late husband’s son.

Headstrong and outspoken, Eileen frustrates her brother’s wishes, as, through the auspices of her uncle, General Moritz O’Connell of the Imperial Austrian Army, she, along with her ebullient elder sister, Abigail, spend the ensuing richly-dramatic and eventful years at the court of the Empress Maria Theresa in Vienna.The sisters learn to navigate the complex and frequently contradictory ways of the court–making a place for themselves in a world far different from remote Derrynane. Together with the general, they experience a complex life at the pinnacle of the Hapsburg Empire.

Beyond Derrynane – and the three books to follow in The Derrynane Saga – will present a sweeping chronicle, set against the larger drama of Europe in the early stages of significant change, dramatising the roles, which have never before been treated in fiction, played by a small number of expatriate Irish Catholics of the fallen “Gaelic Aristocracy” (of which the O’Connells were counted as being amongst its few basically still-intact families) at the courts of Catholic Europe, as well as relating their complex, at times dangerous, lives at home in Protestant Ascendancy-ruled Ireland.

In addition to Eileen’s, the books trace the largely-fictional lives of several other O’Connells of Derrynane, it is the tantalisingly few facts that are historically documented about them which provide the basic threads around which the tale itself is woven, into which strategic additions of numerous historical and fictional personalities and events intertwine seamlessly.

Kevin O’Connell is a native of New York City and a descendant of a young officer of what had—from 1690 to 1792—been the Irish Brigade of the French army, believed to have arrived in French Canada following the execution of Queen Marie Antoinette in October of 1793. At least one grandson subsequently returned to Ireland and Mr. O’Connell’s own grandparents came to New York in the early twentieth century. He holds both Irish and American citizenship.

He is a graduate of Providence College and Georgetown University Law Centre.

Mr. O’Connell has been a serious student of selected (especially the Eighteenth Century) periods of the history of Ireland for virtually all of his life; one significant aspect of this has been a continuing scholarly as well as personal interest in the extended O’Connell family at Derrynane, many even distant and long-ago members of which, especially the characters about whom he writes, he has “known” intimately since childhood.

The father of five children and grandfather of ten, he and his wife, Laurette, live with their golden retriever, Katie, near Annapolis, Maryland.

This book is the the story of Eileen O’Connell for the most part. It is the first in a trilogy about the O’Connell family of Derrynane, Ireland – a family that lived (lives) from a place that exists. But beyond those two facts the book is pretty much fictional. (I googled – I’m an inveterate googler.)

Eileen is forced into a marriage by her head of the family older brother – their father having died. His only concern is the profit the marriage can bring to the family. He sends her off to her new husband with little or no care for her comfort. I won’t go in to how things work out as I don’t want to spoil the plot. I’ll just note she returns home a widow not long after she left. This leaves her in a difficult position; she was used to the running of her own household and can’t easily step back into a child’s role. Fortunately an opportunity to join the Hapsburg court arrives thanks to her uncle and so she and her sister head out.

The court life turns out to be just what Eileen needed. She and her sister melt right in – almost too easily. But it’s a small complaint in a good book. There were a few plot points that just didn’t ring true but overall I enjoyed the book. I found the life of this young woman to be very interesting and it’s a point of view not usually seen in the books that I read. I’ll look forward to the next two books in the trilogy.