Mmmm, coffee. I don’t know about you but I start my day with a strong cup every day. When offered this book by Piers Alexander about the coffee business, The Bitter Trade – I was all over it. I was sent a free copy for my honest review. 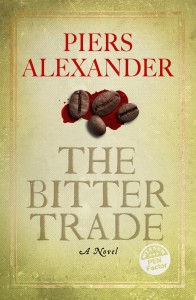 About The Bitter Trade:

In 1688, torn by rebellions, England lives under the threat of a Dutch invasion. Redheaded Calumny Spinks is the lowliest man in an Essex backwater: half-French and still unapprenticed at seventeen, yet he dreams of wealth and title.

When his father’s violent past resurfaces, Calumny’s desperation leads him to flee to London and become a coffee racketeer. He has just three months to pay off a blackmailer and save his father’s life – but his ambition and talent for mimicry pull him into a conspiracy against the King himself. Cal’s journey takes him from the tough life of Huguenot silk weavers to the vicious intrigues at Court. As the illicit trader Benjamin de Corvis and his controlling daughter Emilia pull him into their plots, and his lover Violet Fintry is threatened by impending war, Cal is forced to choose between his conscience and his dream of becoming Mister Calumny Spinks.

Piers Alexander is an author and serial entrepreneur. After a successful career as CEO of media and events companies he became a Co-Founder and Chairman of three start-up businesses. In 2013 he was awarded the PEN Factor Prize for The Bitter Trade. He is currently working on the sequel, Scatterwood, set in Jamaica in 1692.

I must admit that I was somewhat surprised by A Bitter Trade – from reading the synopsis I was expecting a tale of coffee. Growing coffee, importing coffee and selling coffee. That is not what this book is about except for a very minimal portion of the plot. What I did get was a tale of a young man coming of age in a very tumultuous time in England’s history (erm, well one of the tumultuous times in England’s history anyway. There were certainly more than a few of them.)

Calumny Spinks is not quite 17 and he lives with his mother and father in rural England. It is not in his understanding why his father will not take him to London to formally apprentice him as a silk weaver so he can begin on his journey to becoming a man of means. He is very concerned with titles and his place in the world and he wants to learn a trade so he can be  away from a father he hates. He doesn’t understand why his father has not allowed him to learn to read and write or why he keeps them buried in the backwater where they live.

Calumny’s father has a very dark past and it manages to find him which leads to a family tragedy. The effects of a visitor from long ago turns Calumny’s life upside down and he finally learns the truth of his father’s life. It forces him to make some hard decisions and learn some equally hard lessons before he reaches his eighteenth birthday.

I do admit to being a touch disappointed that the book wasn’t exactly about the coffee trade but it was an entertaining read. Calumny had to be the luckiest kid in 17th century England though, cause just about every woman he met  wanted to take him to bed. Sex notwithstanding the plot involved the removal of James II and the ultimate installation of William and Mary on the throne. The politics of the guilds and the Glorious Revolutions was a bit muddled and if this is your first foray into English history you’ll be hitting the google methinks but the underlying story is a good one full of twists, turns and sword fights.

The characters were for the most part varied and well developed but I couldn’t for the life of me get a handle on Calumny’s father. He was all one note then he’d do something completely crazy and then go back to his normal self. So he confused me. The ending was a little vague too – it seems to be setting up for a second book perhaps? I don’t know if another one is coming I do know that this one kept me fully engaged for a cross country plane ride so I’m always happy with a book that can do that.

You can read my review of Scatterwood