Blame the Dead by Ed Ruggero – Book Spotlight with a Giveaway

I am pleased to welcome Ed Ruggero today with his new book Blame the Dead. Read on to learn all about this exciting new WWII historical thriller. 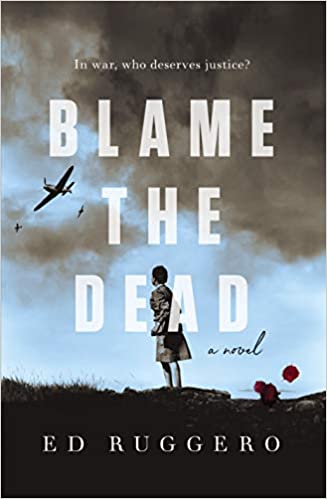 About Blame the Dead:

Ed Ruggero’s Blame the Dead is the thrilling start of an action-packed and timely World War II series by a former Army Officer for fans of compelling historical fiction.

Set against the heroism and heartbreak of World War II, former Army officer Ed Ruggero brilliantly captures, with grace and authenticity, the evocative and timeless stories of ordinary people swept up in extraordinary times.

Sicily, 1943. Eddie Harkins, former Philadelphia beat cop turned Military Police lieutenant, reluctantly finds himself first at the scene of a murder at the US Army’s 11th Field Hospital. There the nurses contend with heat, dirt, short-handed staffs, the threat of German counterattack, an ever-present flood of horribly wounded GIs, and the threat of assault by one of their own―at least until someone shoots Dr. Myers Stephenson in the head.

With help from nurse Kathleen Donnelly, once a childhood friend and now perhaps something more, it soon becomes clear to Harkins that the unit is rotten to its core. As the battle lines push forward, Harkins is running out of time to find one killer before he can strike again.

ED RUGGERO is a West Point graduate and former Army officer who has studied, practiced, and taught leadership for more than twenty-five years. His client list includes the FBI, the New York City Police Department, CEO Conference Europe, the CIA, the Young Presidents Organization, Forbes, among many others. He has appeared on CNN, The History Channel, the Discovery Channel, and CNBC and has spoken to audiences around the world on leadership, leader development and ethics. Blame the Dead is his first novel starring World War II military police officer Eddie Harkins. He lives in Philadelphia.

One lucky US reader will win a copy of Blame the Dead. Just enter as many ways as you would like on the Gleam widget below. Full rules are on the widget. Good luck everyone.