The Bleak and Empty Sea by Jay Ruud – Book Review

I always enjoy a trip to Camelot; the King Arthur legend is one of my favorites and when I can revisit it with a new author I look forward to the trip. The Bleak and Empty Sea by Jay Ruud is the third in a series but it easily stands alone. The book is touring with TLC Book Tours. 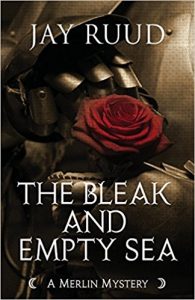 About The Bleak and Empty Sea:

When word comes to Camelot that Sir Tristram has died in Brittany of wounds suffered in a skirmish, and that his longtime mistress, La Belle Isolde, Queen of Cornwall, has subsequently died herself of a broken heart, Queen Guinevere and her trusted lady Rosemounde immediately suspect that there is more to the story of the lovers’ deaths than they are being told. It is up to Merlin and his faithful assistant, Gildas of Cornwall, to find the truth behind the myths and half-truths surrounding these untimely deaths. They take ship to Brittany to investigate, and find themselves stymied by the uncooperative attitudes of Tristram’s close friend Kaherdin, lord of the city; his sister and Tristram’s wife Isolde of the White Hands; and Brangwen, La Belle Isolde’s faithful lady-in-waiting.

The case is complicated by the facts that King Mark of Cornwall is Gildas’s own liege lord, and that Duke Hoel, Lord of Brittany, is King Arthur’s close ally and father of the lady Rosemounde, who urges Gildas to clear the name of her half-sister, Isolde of the White hands, whom gossip has implicated in Tristram’s untimely death. By the time they are finally able to uncover the truth, Gildas and Merlin have lost one companion and are in danger of losing their own lives.

Jay Ruud is the retired Chair of the English Department at the University of Central Arkansas, and former Dean of the College of Arts and Sciences at Northern State University. His Ph.D. in medieval literature turned him into an avid fan of the legends of King Arthur, and kindled a passion for retelling those stories in his own way. The Bleak and Empty Sea follows the first two books of the Merlin mystery series, Fatal Feast and The Knight’s Riddle.  A lover of Chaucer, Dante, and Tolkien, he has also authored four books of literary criticism and scholarship (on Chaucer, Dante, Tolkien, and an encyclopedia of medieval literature). In addition, he is a lifetime Cubs fan who finally lived to see a world series, and he hopes one day to visit Antarctica.  For more information, please go to jayruud.com.

I did not realize when I accepted this book for review that it was part of a series. Whether I just glossed over that as I read the synopsis or just didn’t keep the information in my head I cannot tell you. It really didn’t impact the story or my enjoyment of the book, it really did stand alone quite nicely. I do think that a person needs at least a grounding in the Camelot/Arthur legend to understand the characters and what is going on. The author does provide a listing at the end of the book describing the characters and how they intertwine.

This volume picks up as Arthur and his knights are trying to figure out whom to invest on to the Round Table when word reaches of the death of Sir Tristam. For this book also includes as its underpinnings the legend of Tristam/Tristan and Isolde/Iseult.  That story is given in far more detail so if you don’t have knowledge of it you needn’t worry. There are questions as to how Tristam died – his wife, another Isolde was cruel to him on his deathbed but did that contribute to his end?

Guinevere asks a young squire by the name of Gildas who once served in her court to find Merlin and to go across the sea and investigate for one of her ladies is sister to Tristam’s wife and fears for her reputation. Gildas and Merlin have had success in the past with solving mysteries so they set off to find the truth of the deaths of Tristam and Isolde.

I will admit to being a little confused at the outset until I got used to the author’s writing style. Once I did things got easier. I found myself quite engaged by the story and rather unsure of who the bad guy was until the end. Some acts I had figured out but that is sometimes the way of mystery books. I found Merlin and Gildas to be entertaining, well balanced characters although Gildas did get on my nerves after a bit. He is just so idealistic – he needs to realize that even kings are human.

I will look forward to further installments of Merlin’s Mysteries because these two are a very interesting pair and I’m sure that no matter what they investigate it will be entertaining.