Blog Tour and Book Review: A Train in Winter by Caroline Moorehead 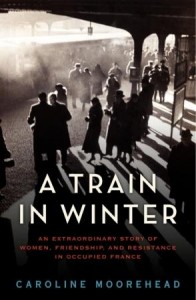 They were teachers, students, chemists, writers, and housewives; a singer at the Paris Opera, a midwife, a dental surgeon. They distributed anti-Nazi leaflets, printed subversive newpapers, hid resisters, secreted Jews to safety, transported weapons, and conveyed clandestine messages. The youngest was a schoolgirl of fifteen, who scrawled “V” for victory on the walls of her lycee; the eldest, a farmer’s wife in her sixties who harbored escaped Allied airmen. Strangers to one another, hailing from villages and cities from across France, these brave women were united in hatred and defiance of their Nazis occupiers.
Eventually, the Gestapo hunted down 230 of these women of the French Resistance and imprisoned them in a fort outside Paris. Separated from home and loved ones, these disparate individuals turned to one another, finding solace and strength in friendship; their common experience conquering divisions of age, education, profession, and class.
In January 1943, they were sent to their final destination: Auschwitz. Only forty-nine would survive.
Interweaving original sources, archival research, and in-depth personal interviews, A Train in Winter is the riveting narrative of this remarkable band of sisters, patriots whose love fortified them in the face of deprivation, horror, and death.


The author of numerous biographies and works of history, including Gellhorn and Human Cargo, Caroline Moorehead has also written for The Telegraph, The Times, and The Independent. The cofounder of a legal advice center for asylum seekers from Africa, she divides her time between England and Italy.


This was not an easy book to read but that does not mean it should not be read. This is a compilation of mini-biographies, if you will, about some of the women who were at the forefront of the French resistance after Germany took over and the Vichy government was established. The stories are of ordinary women driven to do what they can to thwart the Germans any way they can.  I must admit to a limited knowledge of this period of history in France’s history.


The individual stories were very interesting but I found the constant references to communism confusing. From what little I do know of the time period (and my French teacher in High School was part of the French Resistance and she told us many tales) it was not an issue of politics as much as it was of getting rid of the Germans. The Vichy Government was as anti-Semitic as the Nazis and many of the Jews who found refuge in France were betrayed by the country that gave them a place to live after the horrors of Hitler.


But back to the women of this story. Ms. Moorehead has garnered details and life stories from several of the survivors for these resistance fighters were rounded up, imprisoned in France and then sent on to Auschwitz. There they were subjected to all of the horrors the world learned of at the liberation of the camps.


These women, these heroines then came home to families that had in some cases forgotten them or counted them dead. They came home to a country that was embarrassed by its behavior and did not want to be reminded of what the occupation government had done and their survival was a reminder.  They come home to friends that did not believe them when they spoke of the horrors that they had endured; being told that such things must be exaggerated because no one could survive such horrors. They came home to a world that years after the war did not believe that the gas chambers existed. In effect to a world that told them they were liars.


The men of the resistance were honored but most of the women were forgotten because their contributions were not considered as meaningful. Books like this are vital. They ARE hard to read but they must be read because the survivors are dying and we need to remember so we as a society don’t allow this to happen again.


Ms. Moorehead’s writing style is simple, plain and to the point. It was sometimes hard to keep track of who was who since she profiled so many women but each of these heroines deserved to have her story told.


You can purchase A Train in Winter on Amazon.com


The rest of the Tour Schedule can be found HERE

Disclosure:  I received a copy of A Train in Winter from TLC Book Tours. Any opinions expressed are my honest opinions and were not impacted by my receipt of the free book. I received no monetary compensation for this post.

Yum
Share
Email
A Train in Winterblog tour and book reviewCaroline Moorehead
Written in the Ashes by K. Hollan Van Zandt #Review
From Kitchen to Table: Guest Post from Vicki at Orion Designs