Blog Tour and Book Review: A View from the Back Pew by Tim O’Donnell 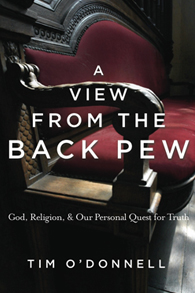 Since the time Tim O’Donnell was a nuisance to the nuns, he has been asking questions about religion and Catholicism. After sixteen years of formal Catholic education followed by a successful business career, at age forty he sold his companies, built a log home in the woods and resumed his inquiry into the religion of his birth. Being a former daily newspaper publisher, O’Donnell unabashedly and unflinchingly dove headfirst into the taboo questions of Christianity, not as a theologian but as an investigative reporter.
His bold probe has generated a straightforward, and at times controversial exploration into questions many Christians carry from Catechism into adulthood.
A View from the Back Pew is a thoughtful, original and organic expose’ of discovery. Grab a seat in the back pew next to Tim and hold on as he navigates over a bumpy and rutted road to answer questions we all have encountered on our own spiritual journey through life.

TIM O’DONNELL owned and ran a daily newspaper publishing company and won dozens of awards for publishing excellence. He has also been an organizational consultant, university lecturer, and keynote speaker. In addition, he has led workshops and seminars on leadership as well as personal and organizational development.
O’Donnell sold his consulting practice and publishing company several years ago to pursue in-depth study of the topic which is now his passion – the effects of organized religion on modern society and the impact of religious indoctrination on the individual.
My Opinion:
Reading Mr. O’Donnell’s book brought back so many memories of my days in Catholic School. From nuns with lethal aim with erasers to May Day processions for the Virgin Mary my early education was almost identical. I suspect we are the same age or very close in age judging from comments made in the book so we both went to school when teachers could still hit students. And the nuns did. A ruler across the back of the hand was nothing; it was that paddle the Mother Superior carried that really struck the fear of, erm God into the students.
This book was very easy to read. Mr. O’Donnell has a very engaging writing style that draws you into his world whether that world is his Catholic school or his business adventures. He was and still is a very curious person; he challenged the nuns in school always questioning them regarding issues that he was told needed to be taken on faith. He wanted more than “mysteries of faith” he wanted answers and so he searched for them. Sometimes in good places, sometimes in bad. Along the way he found himself studying in Italy were he had a revelation and what he considered to be a promise from God. His acceptance and agreement to the promise drives the rest of his life.
I found Mr. O’Donnell’s study of his religion and other religions to be thorough and adequately documented in the book. He is not creating a new religion but showing his readers how he found a better relationship with God within the confines of his Catholicism. He strongly encourages the reader to follow his example to find a more personal relationship with Jesus as opposed to needing the church to develop and nurture that relationship. He feels that the “corporate” church has corrupted the message Jesus came here to tell. That Jesus came to question authority and to question existing doctrine and so should we.
Religion is a very personal and at times touchy topic.  Mr. O’Donnell is not by any means trying to force his reasonings on the reader but I felt at times that he came across as arrogant in his writing; as if he had found all of the answers and that was that. There is a fine line between confidence and arrogance and in my reading experience Mr. O’Donnell crossed it. Others may disagree…
A View from the Back Pew

is available on Amazon.com

Disclosure:  I received a copy of A View from the Back Pew gratis from TLC Book Tours. Any opinions expressed are my honest opinions and were not impacted by my receipt of the free book. I received no monetary compensation for this post.
Share
Pin
Yum
Share
Email
A View from the Back Pewblog tour and book review
Book Review: Mr. Darcy’s Secret by Jane Odiwe
Book Review: Gideon’s Sword by Douglas Preston and Lincoln Child