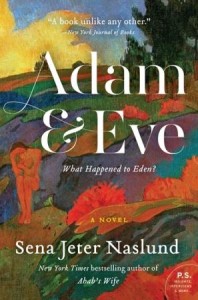 By decoding light from space, Lucy Bergmann’s astrophysicist husband discovers the existence of extraterrestrial life; their friend, anthropologist Pierre Saad, unearths from the sands of Egypt an ancient alternative version of the Book of Genesis. To religious fanatics, these discoveries have the power to rock the foundations of their faith. Entrusted to deliver this revolutionary news to both the scientific and religious communities, Lucy becomes the target of Perpetuity, a secret society. When her small plane crashes, Lucy finds herself in a place called Eden with an American soldier named Adam, whose quest for both spiritual and carnal knowledge has driven him to madness.
Set against the searing debate between evolutionists and creationists, Adam & Eve is a thriller, a romance, an adventure, an idyll—a tour de force from Sena Jeter Naslund, one of the most imaginative and inspired writers of our time.

Sena Jeter Naslund is the author of the novels Four Spirits and Abundance, A Novel of Marie Antoinette and a short story collection, The Disobedience of Water. A native of Birmingham, Alabama, she is a winner of the Harper Lee Award; Distinguished Teaching Professor and Writer in Residence at the University of Louisville; director of the Spalding University brief-residency Master of Fine Arts in Writing program; former poet laureate of Kentucky; and editor of The Louisville Review and the Fleur-de-Lis Press.
Find Sena on Facebook.


Adam and Eve is set just a few years in the future where we meet Lucy Bregmann, happily married to Thom, an astrophysicist who may have discovered life elsewhere in the universe. He is tragically killed (murdered?) and she is left only with a flash drive of his last report. The report that may or may not show where that life is.


In Egypt Pierre Saad stumbles upon a lost codex with the thoughts of a pre-Biblical man on the origins of Genesis. He needs to get it out of Egypt and translate it.


Lucy is attending a conference honoring Thom and there Pierre asks her to fly the codex to France where he lives. As she is cruising the plane starts to fail and she crash lands in a large oasis where she finds Adam; a somewhat delusional US soldier who had been captured, tortured and dumped in the desert to die.


Adam thinks he is ADAM, the first man and that he talks to God. He thinks Lucy is Eve and that they are in Eden. He has flashes of lucidity but it’s not until they decide to leave Eden that he stays on the right side of sanity for long periods.


After reading the synopsis I couldn’t wait to begin this book. I was excited at the prospect of delving into a Bible-bending suspense thriller. I am sorry to say that the book didn’t live up to its description. Ms. Naslund’s way with words IS magical; her descriptions of Adam and Lucy’s Eden bring to mind a truly perfect place to live. The way she describes the cave paintings in France brought them completely to life for me. I just wish the story had been as complete.


I was drawn in immediately. The first half to two thirds of the book is very good, it started to fall apart for me when another soldier parachuted into Eden, hurt after his plane was damaged. There is minimal explanation for the continuing war. Why was no one sent to find this soldier? Why was no one sent to find Lucy for that matter or Adam? It just makes no earthly sense.


Then the mysterious “bad guys” – they are not at all fleshed out. They zoom in and out with no real purpose other than to “get” the codex and the flash drive. I really think that an excellent book was lost in the midst of a philosophical debate over where we came from. It all could have been included but in trying to appease all no one is satisfied.


Or maybe I am just too literal and it went over my head. I don’t know. I am not sorry I read it but I am sorry it was not what I wanted it to be.


Adam and Eve is available at Amazon.com

You can read the rest of the reviews and see the tour schedule HERE.

Disclosure:  I received a copy of Adam and Eve gratis from TLC Book Tours. Any opinions expressed are my honest opinions and were not impacted by my receipt of the free book. I received no monetary compensation for this post.