Blog Tour and Book #Review: All the Flowers in Shanghai by Duncan Jepson 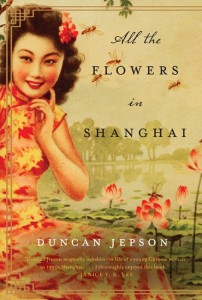 
Duncan Jepson is the award-winning director and producer of five feature films. He has also produced documentaries for Discovery Channel Asia and National Geographic Channel. He was the editor of the Asia-based fashion magazine West East and is a founder and managing editor of the Asia Literary Review. A lawyer by profession, he lives in Hong Kong.


This books shares the story of a very young, very naive girl in pre-revolution China, Feng. She is the second born and all of her mother’s energy has been poured into her elder sister. Her mother longs to enter “society” and is using the marriage of her first daughter to try and achieve this goal. When the seamstress comes to make the wedding dress Feng meets his son and imagines herself in love with him as she shares time with him in the family gardens.


When her sister dies Feng is basically sold into the marriage her mother so much desired – to save face. Feng is totally unaware of the world around her except for the Latin names of all the flowers in the garden taught to her by her grandfather. He is against the marriage but he leaves rather than stand up to the force of his daughter in law.


Feng enters into her new family totally unprepared for living in such a rigid household. No one has told her anything about life. My first problem with the book was that a seventeen year old girl, even in this time period could be THIS clueless. Feng did not even know what marriage was let along sex. She didn’t realize that she would be leaving her family. I found it hard to believe. She read more like a pre-teen than a seventeen year old.


After she enters the marriage and makes her “terrible revenge” she turns into a femme fatale with her husband. Where did this woman come from? A girl who knew nothing about sex now, with no further conversation or teaching from her husband is suddenly a tease extraordinaire? This change was a bit of a stretch for me.


The back and forth of this woman in her feelings of love and hate were like whiplash. I could totally understand why she would hate her situation but the ways she chose to deal with it were a bit extreme to say the least. It made the book less believable and that’s a shame because the writing was so good. I found myself drawn into the time and place with the flow of the words. I felt the emotions when they rang true but so many situations just felt so wrong. Maybe it is cultural? I don’t know – I have read many a book that has taken place in China in different time periods and have not felt like this. It was definitely worth reading but I won’t read it again.


See the rest of the Tour Schedule HERE

Disclosure:  I received a copy of All the Flowers in Shanghai from TLC Book Tours. Any opinions expressed are my honest opinions and were not impacted by my receipt of the free book. I received no monetary compensation for this post.

Share
Pin
Yum
Share
Email
All the Flowers in Shanghaiblog tour and book review
New Year’s Dinner – A Delightful Treat
Blog Tour and Book #Review: At the Mercy of the Queen by Anne Clinard Barnhill #MercyOfTheQueenVIrtualTour