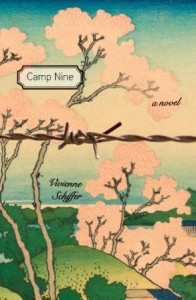 The time of fear and prejudice following the bombing of Pearl Harbor and the Arkansas Delta are the setting for Camp Nine. The novel’s narrator, Chess Morton, lives with her widowed mother in Rook, a town too tiny to have a bank, a library, a restaurant, or even a church. Chess’s days are quiet and secluded until the appearance of a concentration camp built to imprison thousands of Japanese Americans forced by military exclusion order to leave their homes on the West Coast.
Chess’s life becomes intertwined with those of two young internees, Henry and David Matsui, and that of an American soldier mysteriously connected to her mother’s past. As Chess watches the struggles and triumphs of these strangers and sees her mother seek justice for these people who came briefly and involuntarily to call the Arkansas Delta their home, she discovers surprising and disturbing truths about her family’s painful past.


Vivienne Schiffer is a novelist and screenwriter who grew up in Desha County, Arkansas, and has practiced law in Houston for many years.


This book tells a fictionalized account of the interned Japanese US citizens during WWII. A camp was set up in Arkansas and our government moved law abiding CITIZENS to a military base simply because they were Japanese. It was one of the worst offenses post-slavery that this country had sanctioned.


Chess Morton is just a child when the Camp is established on land that was hers; her grandfather is guardian of her estate and he sells it to the government. She is of the “landed gentry” in the area and very protected. Her mother was born of immigrant parents and not at all what was expected in a wife for a Morton. Chess’s father died young leaving her with a mother trying to what was best for her child in a difficult time.


Into their protected world drops Camp Nine, the Japanese internment prison. The colonel in charge of the camp is an old friend of Chess’s mother and she becomes involved with him and the people at the camp. She starts teaching art classes and becomes friendly with one family in particular, the Matsuis.


Chess tries to remain ignorant of the camp but her mother forces her to acknowledge it. She starts going to the camp and she befriends the young Matsui boys, David and Henry. She learns that there is a whole other world outside of her pampered, Southern upbringing.


In spite of learning some harsh facts about the world at large Chess still remains in the dark about much that goes on around her until the conclusion of the book when a final meeting lays bare a past she thought she understood and exposes truths as lies.


This was a beautifully written book covering a horrible topic. Despite this, Ms. Schiffer has crafted a novel that I found to be one that I will keep and read again. I don’t do this often. Chess is the focus of the tale, not the Camp. It is her story; as she grows and learns and finally discovers her painful past. All of the adults in her life wanted to protect her from the worst of life and I am not sure they did her any favors.


I think this is book that will be even better on a second reading. The foreknowledge of the ending will allow the reader to better appreciate some of the characters’ actions. In spite of the awful topics – internment, racial hostility, the Klan – the book is softly written. I will look forward to further  writings from Ms. Schiffer.


Camp Nine is available at Amazon.com


You see the rest of the Tour Schedule HERE

Disclosure:  I received a copy of Camp Nine gratis from TLC Book Tours. Any opinions expressed are my honest opinions and were not impacted by my receipt of the free book. I received no monetary compensation for this post.