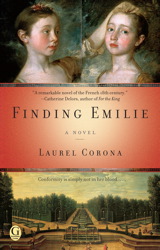 
From an award-winning author comes an exquisite historical novel about two young women growing up in pre-Revolution France, set against the freethinking French Enlightenment salons of Paris.
Lili is a thoughtful and serious girl growing up as the ward of a Parisian noblewoman, Julie de Bercy. Madame de Bercy, a friend of Lili’s late mother, a brilliant and controversial scientist, has a daughter, Delphine, the same age as Lili. Though they could hardly be more different, the two girls grow up as sisters, steadfast friends, and confidantes. Delphine sets her sights on a courtly marriage, while Lili pursues a love based on a shared life of the mind.Lili can never understand Delphine’s fascination with frivolous things like beautiful dresses, perfect curtsies, and fairytale endings. She prefers a life in pursuit of the truth about nature and people. But when she boards with Delphine at a convent school where independent thinking is punished, it becomes clear to Lili that she is expected to be satisfied with having no goals in life other than to be a supportive wife, charming conversationalist, and pious mother.Set in France during the last decades before the French Revolution, Finding Emilie explores the complicated tensions between the frivolity of court and the serious pursuit of scientific knowledge, and the perils of being caught between the demand for conformity and the need to fulfill one’s genius. Through Lili’s discoveries, we are reminded of the importance of remaining true to ourselves—regardless of the consequences.


This was not a standard historical novel. While it does take place in the past it is focussed more on the people and their thoughts rather than the history taking place around them. The history is important because it drives the times but the book is not about those times, per se.


Lili is a child growing up without her mother. She is taken in by her mother’s best friend and brought up with her daughter, Delphine. They are like sisters even though they are almost polar opposites in temperament.  Lili’s mother defied convention; she was a highly intelligent woman who pursued science and society be damned. Lili shares her mother’s intelligence and fortunately for her the times are changing a bit and her desire to be more than a decoration on the arm of a man is a bit more accepted than in her mother’s day.


Lili knows almost nothing about her mother and the book is told in two parts; Lili’s story and Emilie’s story. We learn about both of them simultaneously. And we learn just how similar they are in some ways – and how different they are in others.


The writing is so fluid and draws you into time and place so that you don’t want to leave. The character of Lili is pure fiction but you forget that as you are pulled along in her story. You believe it could have happened. You want it to have happened. Lili is such an engaging young woman that you want to stay in her company. This was an exciting time in French history and the book ends just before the Revolution. Somehow knowing what is to come makes it all the worse to leave them at that point in time.


This was a truly wonderful book about an unconventional woman – while Lili is fictional her mother Emilie was not. Her tale is utterly fascinating.


Finding Emilie is available at Amazon.com

Disclosure:  I received a gratis copy of Finding Emilie from Gallery Books. Any opinions expressed are my honest opinions and and were not impacted by my receipt of the free book.  I received no monetary compensation for this post.