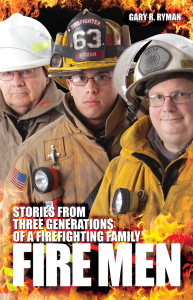 
Having served over thirty years in fire departments across three states, Gary R. Ryman brings a unique perspective to the firefighting experience. The son and father of firefighters, Ryman ignites the fire, smoke, blood and fear spanning three generations of the “family business.” He recounts his early days in upstate New York learning from his father, the department fire chief. He describes the blazes he battled with a career and volunteer crew in the crowded suburbs of Washington, D.C. He examines the mentoring relationship established with his son as they respond to the calls of a volunteer department in rural Pennsylvania. Overall, Ryman shares both the personal and professional turning points that define a firefighting career.


Gary R. Ryman is the second of three generations of firefighters. He has a bachelor’s degree in Fire Science from the University of Maryland and has been employed as a fire protection engineer for over twenty-five years. He is currently pursuing a master’s degree in American History. Ryman is married with two children. His oldest son makes up the third generation of firefighters in his family, which makes him feel both old and young at the same time.


My hubby has been a volunteer firefighter or volunteer EMT for over 40 years. He is currently fire chief in our town so I chose this book for both of us  – I figured he would enjoy it. My brother is also a volunteer firemen. In fact the hubby responded to a fire on the day of our wedding. Later in the day the whistle blew in the middle of our reception which was being held at the fire hall. Afterward we invited the returning firefighters back to the party. I’m a fireman’s wife….


The book is a memoir of the exploits of three generations of fire fighters. We should all be very grateful for the men and woman that volunteer their time for such dangerous but necessary jobs. The training they undertake to respond to a fire or emergency call is quite extensive.


That being said I was somewhat disappointed in the book. It’s a series of stories just thrown together in no apparent order. Some of them are very interesting and heart pounding others not so much. My hubby said that for a firefighter there were many instances of a lack of proper safety procedures with no follow up explanation of what should have been done. The writing style is easy to read and very familiar but I found the curse words a detriment to the stories. I recognize that when a bunch of manly men get together much cursing occurs but it is necessary in the retelling or is it for shock value?


It will certainly open the eyes of people not aware of what a firefighter or EMT encounters in the course of doing their jobs.


Disclosure:  I received an e-copy of Fire Men gratis from Tribute Books. Any opinions expressed are my honest opinions and were not impacted by my receipt of the free book. I received no monetary compensation for this post.