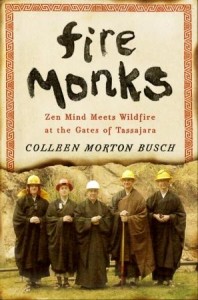 Fire Monks: Zen Mind Meets Wildfire at the Gates of Tassajara by Colleen Morton Busch pivots on the kind of moment some seek and some run from, when life and death hang in simultaneous view. When a massive wildfire surrounded Tassajara Zen Mountain Center, five monks risked their lives to save it. Novices in fire but experts in readiness, the Tassajara monks summoned both intuition and wisdom to face crisis with startling clarity.
Deep in the wilderness east of Big Sur, the oldest Zen Buddhist monastery in the United States is connected to the outside world by a single unpaved road. The remoteness that appealed to Tassajara founder Shunryu Suzuki Roshi (author of the classic Zen Mind, Beginner’s Mind) also makes the location particularly vulnerable in an emergency. When wildfires blazed across the state of California in June 2008, firefighters advised residents at Tassajara to evacuate early. Most did, but a small crew stayed behind, preparing to protect the monastery when the fire arrived. However, a treacherous shift in weather conditions necessitated a full evacuation, including all firefighters. Unwilling to abandon Tassajara, five senior monks made the risky decision to turn back. Relying on their Zen training, they were able to remain in the moment and do the seemingly impossible—to greet the fire not as an enemy to defeat, but as a friend to guide.
A primer on the Zen path and the ways of wildfire, Fire Monks offers a gripping narrative and a profound lesson in the art of living, revealing what it means to meet a crisis with full presence of mind.
About the Author:

Colleen Morton Busch’s nonfiction, poetry, and fiction have appeared in a wide range of publications, from literary magazines to the San Francisco Chronicle and Yoga Journal, where she was a senior editor. A Zen student since 2000, Busch lives in Berkeley, California.
Find out more about Fire Monks and Colleen at www.fire-monks.com
My Opinion:
I was drawn to this book for two reasons – I live with a Buddhist and fire is a big, big issue in these parts. In the summer it sometimes surrounds us. When you live in the forest you learn to live with fire.  Hubby is going to read it now that I’m done.
The book tells the tale of the big California wildfires in 2008 that were all over the news. I remember watching them from here and thinking there but for the grace of God and all that. Lightening strikes and a dry forest and all hell breaks loose. Deep inside the Ventana wilderness lies the Tassajara Zen Mountain Center and the fire is coming towards it. The monks have some gear and minimal training; can they meet the fire?
Ms. Morton Busch tells the story of the Fire Monks through interviews with people who were there before, during and after the fire. The reader meets the monks of the center and learns how zen philosophy can be useful in life and dealing with the onslaught of a massive wildfire.


The story unfolds as the monks first learn that the fire might impact the retreat. The summer visitors are just starting classes but soon have to evacuate. The monks then set about making the place as fire safe as possible before an evacuation is called. Most leave but a core group stays. As the fire gets closer they are ordered to leave since the state will not send trained firefighters in to help them. As they leave a core group decides they are going to go back and defend the retreat no matter the consequences.

The individual stories are interesting and desire of the monks to save their retreat makes for a very compelling read. Five monks risked everything and put their practice of focusing on the
now into very real use.

You can check out the rest of the Tour stops:


Fire Monks is available on Amazon.com


Disclosure:  I received a copy of Fire Monks from TLC Book Tours gratis. Any opinions expressed are my honest opinions and were not impacted by my receipt of the free book. I received no monetary compensation for this post.