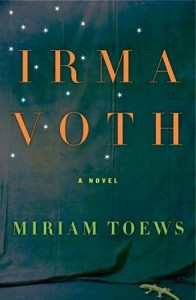 Nineteen-year-old Irma lives in a rural Mennonite community in Mexico. She has already been cast out of her family for marrying a young Mexican ne’er-do-well she barely knows, although she remains close to her rebellious younger sister and yearns for the lost intimacy with her mother. With a husband who proves elusive and often absent, a punishing father, and a faith in God damaged beyond repair, Irma appears trapped in an untenable and desperate situation. When a celebrated Mexican filmmaker and his crew arrive from Mexico City to make a movie about the insular community in which she was raised, Irma is immediately drawn to the outsiders and is soon hired as a translator on the set. But her father, intractable and domineering, is determined to destroy the film and get rid of the interlopers. His action sets Irma on an irrevocable path toward something that feels like freedom.
A novel of great humanity, written with dry wit, edgy humor, and emotional poignancy,Irma Voth is the powerful story of a young woman’s quest to discover all that she may become in the unexpectedly rich and confounding world that lies beyond the stifling, observant community she knows


Miriam Toews was born in the small Mennonite town of Steinbach, Manitoba. She has published five novels and a memoir of her father, and is the recipient of numerous literary awards in Canada, including the Governor General’s Literary Award (for A Complicated Kindness) and the Rogers Writers’ Trust Fiction Prize (for The Flying Troutmans). In 2010 she received the prestigious Writers’ Trust Engel/Findley Award for her body of work. Irma Voth is Toews’s most recent novel. She lives in Toronto


I apologize for the delay in getting this review posted. It’s canning season so my reading time gets curtailed.


Irma Voth is a young Mennonite woman from Canada whose family moved to Mexico. She is married to a Mexican man named Jorge who is a rather absent man. She has a very annoying younger sister named Aggie. A somewhat famous movie director comes to her middle of nowhere existence to film a movie about which I never understood the concept. In fact there were many things in this book about which I never understood.


It is written in Irma’s voice in a very stream of consciousness way. Topics can change in an instant and have minimal bearing to one another. Very little is explained. Maybe I needed to be under the influence of some of what Irma’s husband was hiding in the barn….


The book did have its moments; some scenes were very funny. It was just hard for me to engage with the cast of characters. So many of them were impossible to like and the overall tone of the book is so very sad.


Irma Voth is available on Amazon.com


You can see the other Tour stops HERE

Disclosure:  I received a copy of Irma Voth gratis from TLC Book Tours. Any opinions expressed are my honest opinions and were not impacted by my receipt of the free book. I received no monetary compensation for this post.