Blog Tour and Book #Review: Late for Tea at the Deer Palace by Tamara Chalabi 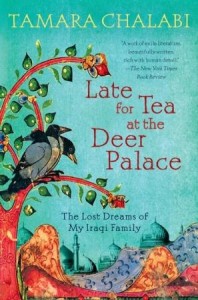 Just ten days after Baghdad’s fall in 2003, Tamara Chalabi arrived in the city after a lifetime in exile—finally entering the homeland she’d known only through stories and her own imagination.
Investigating four generations of her family’s history at the forefront of Iraqi society, Chalabi offers a rich portrait of Middle Eastern life and a provocative look at a lost Iraq. Unforgettable characters provide glimpses of the end of the Ottoman Empire, the birth of the Iraqi state, the flowering of “the Paris of the Middle East,” and Iraq’s descent into chaos. At once intimate and magisterial, Chalabi’s memoir of return and reclamation vividly captures the rich history of a country shattered by war and a family that has never forgotten its past.
About the Author:
Tamara Chalabi holds a PhD in history from Harvard University. She has written for The Wall Street Journal, The New Republic, Slate, and The Sunday Times, among other publications.


First off, isn’t that cover gorgeous. I would see that in a bookstore and I would make a bee line I can tell you that.


In the forward Ms. Chalabi tells the reader that if they are looking for information on her father’s activities after the fall of Saddam that they are not in the book. The book is her story – but it is not so much her story as the story of her grandmother, Bibi and the story of Iraq.


It is not quite a memoir, not a history either but no matter what it is, Late for Tea at the Deer Palace was a fascinating read. The Chalabi family has been close to the ruling elite of what became Iraq from the end of the Ottoman empire through the British mandate and into the Kingdom of Iraq. They only fell out of favor when the royal family was assassinated in a coup in the 1950s. The family was slowly able to leave the country and settle first in London, then in Lebanon.


Ms. Chalabi spares no punches with stories of her family but it is her grandmother that rules the book and I suspect who ruled the family when she was living. She comes through as a very strong character and not always in the best of lights. I would say that 80% of the book covers Bibi and her life and times. The rest is devoted to early Iraq and current events. Precious little of Tamara’s story is really fleshed out.


The book reads like a novel and it was like living the history of Iraq with Ms. Chalabi’s family. Her passionate re-telling of these stories allows the reader to remember a time when Iraq was not a news story and to remind us that it is so much more than the sum of two Gulf Wars. Iraq has a long and rich history that deserves remembering as so much of society was born in its lands.

Disclosure:  I received a copy of Late for Tea at the Deer Palace gratis from TLC Book Tours. Any opinions expressed are my honest opinions and were not impacted by my receipt of the free book. I received no monetary compensation for this post.