Blog Tour and Book #Review: Our Man in the Dark by Rashad Harrison 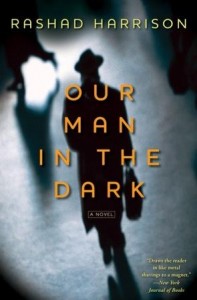 A stunning debut historical noir novel about a worker in the civil rights movement who became an informant for the FBI during the months leading up to the assassination of Dr. Martin Luther King, Jr.
Feeling unappreciated and overlooked, John Estem, a bookkeeper for Dr. King’s Southern Christian Leadership Conference (SCLC), steals ten thousand dollars from the organization.
To the bookkeeper’s dismay, the FBI has been keeping close tabs on Dr. King and his fellow activists—including Estem—for years. FBI agents tell Estem that it is his duty, as an American and as a civil rights supporter, to protect the SCLC from communist infiltration.
Playing informant empowers Estem, but he soon learns that his job is not simply to relay information on the organization. The FBI discovers evidence of King’s sexual infidelities, and set out to undermine King’s credibility as a moral leader.
This timely novel comes in light of recent revelations that government informants had infiltrated numerous black movement organizations. With historical facts at the core of Our Man in the Dark, Harrison uses real life as a great inspiration for his drama-filled art.

Rashad Harrison has been a contributor to MedicineAgency.com, an online journal of political and cultural commentary, and his writing has appeared in Reed magazine. As a Jacob K. Javits Fellow, he earned a Master of Fine of Arts in Creative Writing from New York University. He lives in Chicago, Illinois.
Visit Rashad at his website, RashadHarrison.com, connect with him on Facebook, and follow him on Twitter.


This very intriguing book is written in a noir style that takes a bit of getting used to. But once you get into the rhythm of the writing you are in for a trip down a rabbit hole to the beginning of the Civil Rights movement. John Estem, the protagonist is a very flawed man. He had polio as a child and has to wear a brace. His father has made him feel like less than a human being let alone a man. John has made it through school and is trying, hard, to become one of the very few black CPAs in the country. He has a job working for the Southern Christian Leadership Conference and thinks he is closer to Martin Luther King than he is.


Wanting to be noticed he steals $10,000 from the Conference to ostensibly start a movement in Chicago but he lured by his darker side into buying some fancy clothes and a new Cadillac to impress his childhood love. She is involved with a gangster named Count who runs a bar/lounge where she is a singer/hooker.


The FBI is looking for a way to get a man inside to spy on Dr. King and they are aware of Estem’s thievery. They leverage that into having him pass them information but Estem doesn’t want to spy on Dr. King so he makes a deal with Count to get the money to pay back the Conference. And so the circle is created.  All of the relationships will be entwined into an explosive ending – and I don’t mean Dr. King’s assassination.


This is a whole different kind of historical fiction. Based on more recent history it delves into a very difficult time period in this country’s history. Martin Luther King did a whole lot of good in his life but he was as human as any other powerful man who couldn’t keep it in his pants. The FBI was looking to use this to destroy the Civil Rights movement. Apparently there was a contingent of blacks that didn’t want change either – the ones making money on segregation. But it was a change that was necessary and it was a change that was going to happen no matter what the FBI did.


The characters surrounding Dr. King are interesting and well developed. The only thing I had a problem with was the conversations that Estem and Dr. King had late at night. It seemed odd that Dr. King would be sharing these types of thoughts with a virtual stranger in his organization. Maybe I am thinking of the man he became rather than the man he was when he started but it just didn’t feel right as I was reading it. It felt like it was forced for the sake of the plot. But it’s a small complaint in a compelling novel. A novel that brings to life a very un-American practice by the government that is supposed to be guarding our rights not destroying them.

Disclosure:  I received a copy of Our Man in the Dark gratis from TLC Book Tours. Any opinions expressed are my honest opinions and were not impacted by my receipt of the free book. I received no monetary compensation for this post.

Yum
Share
Email
blog tour and book review
Guest Post from Anne Clinard Barnhill, Author of At the Mercy of the Queen
Baking for the Firemen: Lemon Blueberry Drizzle Bread