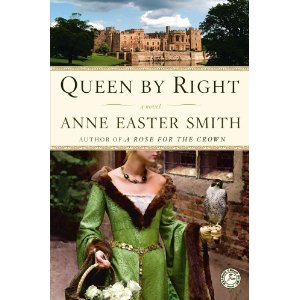 
In Cecily Neville, duchess of York and ancestor of every English monarch to the present day, Anne has found her most engrossing character yet. Cecily earned two monikers from her contemporaries: Rose of Raby for her fair-haired beauty and Proud Cis for her fierce loyalty and courage in the face of the many history-making events she experienced in her eighty years. This was a woman who could have been queen had her husband lived to win the day over Henry VI and his queen, Margaret of Anjou, in the winter of 1461.

History remembers Cecily of York standing on the steps of Ludlow Castle, facing an attacking army while holding the hands of her two young sons. Queen by Right reveals how she came to step into her destiny, beginning with her marriage to Richard, Duke of York who she meets when she is nine and he is thirteen. Raised together in her father’s household, they become a true love match, and together they face personal tragedies, pivotal events of history, and deadly political intrigue.

All of England knows that Richard has a clear claim to the throne, and when King Henry VI becomes unfit to rule, Cecily must put aside her own hopes and fears and help her husband decide what is right for their family and the kingdom. As civil war escalates between the cousins of Lancaster and York, Cecily will lose her love, her favorite brother and her dearest child. But in the end, she will watch proudly as her oldest son takes his father’s place at the head of a victorious army and is crowned at Westminster Abbey as King Edward IV.


I spent my childhood in England, Germany and Egypt as the daughter of a British Army colonel. At my boarding school in Surrey a teacher we called “Conky” — after William the Conqueror — inspired my passion for history. When in my early 20s, I read Josephine Tey’s “A Daughter of Time”, I became particularly fascinated by Shakespeare’s so-called villain, Richard III.
At age 24, after living and working as a secretary in London and Paris, I came on a lark to New York with my flatmate just for a “two-year stint.” Thirty years, two marriages, two children and five cross-country moves later I’m very definitely a permanent resident of the U.S. — but my love for English history remains.


I began writing professionally a few years after I landed in Plattsburgh, NY near the beautiful Adirondack Mountains with my first husband and daughters, Joanna and Kate. For ten years, I was the Features/Arts Editor for the daily newspaper and wrote articles on every conceivable subject that was not hard news! It proved a wonderful training ground for my foray into authoring.


I must admit to not knowing much about Cecily Neville before I started
this book. So much of written history focuses on the men it is
delightful that modern historical novelists are bringing the women to
the forefront.

I must admit that I have found a new favorite writer. Anne Easter
Smith is exceptional at creating a world you don’t want to leave. She
writes the kind of book that stays with you long after you put it down
– at least this book did. I have not had the opportunity to read any
of her other books but hope I will in the future.  In this book she
brings Cecily Neville to life as an intelligent, lively child who
grows into an astute advisor to her husband, Richard of York. When he
dies in the battle for the throne she gathers her strength and sees
her son crowned.

This is a lengthy book but I found it very hard to put down in spite
of the fact that I have read several books covering this time period
in the last few months. It is fascinating to read the history from the
varying points of view and this book does not stint on detail and the
warring within Cecily’s own family for power. She was born Lancaster
but married York. What a conundrum!

I loved how Ms. Easter Smith managed to include the important and the
mundane and make it all part of the story. You never felt like you
were being lectured to even when the politics of the time were being
explained. The small details of clothing, food and household were all
part of wrapping you up in the story and making you feel part of the
time.  I really did not want the book to end.

I will have a guest post and a giveaway for Queen by Right on May 20th
so be sure to come back and enter!


Queen by Right is available at Amazon.com


Disclosure:  I received a copy of Queen by Right gratis. Any opinions expressed are my honest opinions and were not impacted by my receipt of the free book. I received no monetary compensation for this post.