Blog Tour and Book #Review: The Ruins of Us by Keija Parssinen 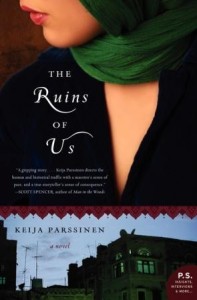 More than two decades after moving to Saudi Arabia and marrying powerful Abdullah Baylani, American-born Rosalie learns that her husband has taken a second wife. That discovery plunges their family into chaos as Rosalie grapples with leaving Saudi Arabia, her life, and her family behind. Meanwhile, Abdullah and Rosalie’s consuming personal entanglements blind them to the crisis approaching their sixteen-year-old son, Faisal, whose deepening resentment toward their lifestyle has led to his involvement with a controversial sheikh. When Faisal makes a choice that could destroy everything his embattled family holds dear, all must confront difficult truths as they fight to preserve what remains of their world.
The Ruins of Us is a timely story about intolerance, family, and the injustices we endure for love that heralds the arrival of an extraordinary new voice in contemporary fiction.


Keija Parssinen was born in Saudi Arabia and lived there for twelve years as a third-generation expatriate. She earned a degree in English literature from Princeton University and received her MFA from the Iowa Writers’ Workshop, where she held a Truman Capote Fellowship and a Teaching-Writing Fellowship. For The Ruins of Us, her first novel, she received a Michener-Copernicus Award. She lives with her husband on the edge of a quarry in Missouri.


In this book you will find a seemingly perfect family; rich, attractive, looking like they have everything they need. Once you look deeper, though, you find that not all is as it seems to be. Rosalie grew up in Saudi Arabia – her father worked in the oil fields. When she meets Abdullah Baylani one night in the bar where she is working while going to college all her childhood memories come flooding back. A longing for what was combined with love has her marrying and returning the desert she so loves.


But she returns not with the freedom of a child but rather as the sheltered wife of an influential Saudi man. Confined by the strictures of society she longs for a freedom she can’t express. When she discovers that her supposedly modern husband has taken a second MUCH younger wife she falls apart. She learns it in a most uncomfortable way and then she finds he has been married to this woman for close to two years. In the midst of the marital fallout neither parent realizes what path their son has started to take. He is torn between his two differing heritages and cannot find himself at home in either. This causes him to make a serious error in judgement with ramifications for all members of his family.


The book is not a happy book by any means but the story was so compelling. I read it in one sitting; I really could not put the book down. The writing is magical for lack of any other word. The descriptions had me feeling the heat of the desert and feeling the suffering of the characters. Of course the husband marries a younger woman and then bemoans that she will age….seriously men – WE ALL GET OLDER. Even you. It’s fiction that makes you want to scream at the book. It ends yet it continues is all I will offer. The characters are fascinating – not a single one of them is one dimensional. So much nuance and so utterly delightful. It’s a book I’m keeping to read again.

You can purchase The Ruins of Us on Amazon.com


Here are links to the author’s website/social media:

The rest of the Tour Schedule can be found HERE

Disclosure:  I received a copy of The Ruins of Us gratis from TLC Book Tours. Any opinions expressed are my honest opinions and were not impacted by my receipt of the free book. I received no monetary compensation for this post.