Blog Tour, Book Review and #Giveaway: Breaking Up with God by Sarah Sentilles 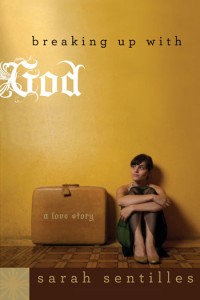 I broke up with God. The breakup was devastating. It was like a divorce when all the friends you had as a couple are forced to choose sides and end up not choosing yours.
Sarah Sentilles’s relationship with God was not casual. When it began to unravel she was in the ordination process to become an Episcopal priest, a youth minister at a church, and a doctoral student in theology at Harvard. You might say they were engaged and that the wedding was all planned. Calling it off would be more than a little awkward. But in the studying of the religion she’d been raised on and believed wholeheartedly, one day she woke up and realized . . . it was over.
In this powerful memoir of faith, Sentilles reveals how deep our ties to God can be, and how devastating they can be to break. Without God to mold herself to and without religion as her script, who was she and what was her purpose? Her relationship with God had been connected to everything—her family, her friends, her vocation, the places she frequented, the language she used, and her way of being in the world.
Not unlike after a divorce, she had to reorient her life and face a future that felt darkly unfamiliar. But this beautiful, brave book is surprisingly filled with hope, a coming-out story that lets others know it’s safe to come out too, and that there’s light on the other side.
About the Author:

Sarah Sentilles is the author of A Church of Her Own andTaught by America. She is a scholar of religion and earned a bachelor’s degree in literature from Yale and a master’s of divinity and a doctorate in theology from Harvard. She lives in Portland, Oregon.
My Opinion:
Ms. Sentilles states she has broken up with God. As one reads her journal like tale of how she came to this realization you get a true sense of her personality. You learn of how she struggled through an eating disorder and a very distorted sense of what God is supposed to be. I did not fathom how she came to pattern God as a boyfriend like figure perhaps because I am significantly older and grew up in a Catholic tradition that held God as something to be feared.

The book is written more like a personal diary in a stream of consciousness manner more than a straight narrative style of book. It tends to wander from place to place and from time to time and lacks a certain focus. Ms. Sentilles is obviously a woman of intelligence and privilege given her education at Yale and Harvard. Yet she continued on in post graduate studies in divinity school and in preparation to become an Episcopal priest in spite of not fully understanding doctrine or having a true calling.

I understand her struggle to define herself and she does offer some interesting theories on religion but her main problem seems to be that she was not “special” to God. He did not answer her specific prayers. She found one church that she liked and when other churches were not the same she was somewhat disappointed that they were not the same.


I have come to the conclusion that my problems with this book are probably generational. I am significantly older than Ms. Sentilles and grew up in a very different time and with far fewer monetary opportunities. I commend her for sharing her story as it was not an easy path for her to travel. I just didn’t enjoy the trip with her.


You can see other opinions from the Tour HERE


Breaking Up with God is available at Amazon.com

Thanks to the publisher I have one copy of the book to give away.
How do you win?
Jump on the Rafflecopter and see….

Disclosure:  I received a gratis copy of Breaking up with God from TLC Book Tours. Any opinions expressed are my honest opinions and were not impacted by my receipt of the free book. I received no monetary compensation for this post.