I love Tudor historical fiction as you all well know by now. I was pleased to accept a copy of The Crown by Nancy Bilyeau from Historical Fiction Virtual Book Tours at no charge for my honest review. 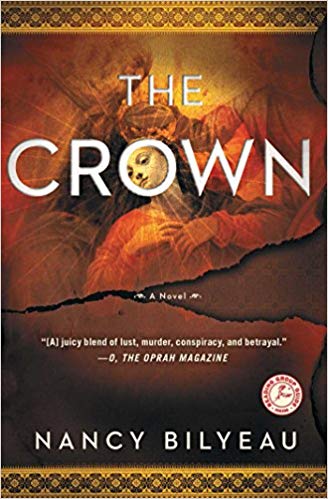 An aristocratic young nun must find a legendary crown in order to save her father—and preserve the Catholic faith from Cromwell’s ruthless terror.  The year is 1537… Joanna Stafford, a Dominican nun, learns that her favorite cousin has been condemned by Henry VIII to be burned at the stake. Defying the sacred rule of enclosure, Joanna leaves the priory to stand at her cousin’s side. Arrested for interfering with the king’s justice, Joanna, along with her father, is sent to the Tower of London. The ruthless Stephen Gardiner, Bishop of Winchester, takes terrifying steps to force Joanna to agree to spy for him: to save her father’s life she must find an ancient relic—a crown so powerful, it may hold the ability to end the Reformation. Accompanied by two monks, Joanna returns home to Dartford Priory and searches in secret for this long-lost piece of history worn by the Saxon King Athelstan in 937 during the historic battle that first united Britain.

But Dartford Priory has become a dangerous place, and when more than one dead body is uncovered, Joanna departs with a sensitive young monk, Brother Edmund, to search elsewhere for the legendary crown. From royal castles with tapestry-filled rooms to Stonehenge to Malmesbury Abbey, the final resting place of King Athelstan, Joanna and Brother Edmund must hurry to find the crown if they want to keep Joanna’s father alive. At Malmesbury, secrets of the crown are revealed that bring to light the fates of the Black Prince, Richard the Lionhearted, and Katherine of Aragon’s first husband, Arthur. The crown’s intensity and strength are beyond the earthly realm and it must not fall into the wrong hands.

With Cromwell’s troops threatening to shutter her priory, bright and bold Joanna must now decide who she can trust with the secret of the crown so that she may save herself, her family, and her sacred way of life. This provocative story melds heart-stopping suspense with historical detail and brings to life the poignant dramas of women and men at a fascinating and critical moment in England’s past.

Nancy Bilyeau  is the author of the best-selling historical thriller “The Blue” and the Tudor mystery series “The Crown,” “The Chalice,” and “The Tapestry,” on sale in nine countries.

Nancy is a magazine editor who has lived in the United States and Canada. She studied History and English Literature at the University of Michigan. After moving to New York City, she worked on the staffs of “InStyle,” “Good Housekeeping,” and “Rolling Stone.” She is currently the deputy editor of the Center on Media, Crime and Justice at the Research Foundation of CUNY and a regular contributing writer to “Town & Country” and “Mystery Scene Magazine.”

Nancy’s mind is always in past centuries but she currently lives with her husband and two children in Forest Hills in the borough of Queens. “Dreamland” is her first novel set in her adopted hometown of New York City.

In this historical thriller set during the reign of Henry VIII we meet a young novice who really wants nothing more than to quietly serve God and become a nun. She is a member of a noble family but her family is not currently in favor. As Cromwell purges the monasteries and priories to fill Henry’s coffers young Joanna finds that desire impossible. She learns that her beloved cousin is to be burned at the stake and she leaves her priory without permission to be there for her. While there Joanna runs into her father and ends up captured and thrown into the Tower for her actions. There she is interrogated an coerced by Bishop Stephen Gardiner to  recover the lost crown of King Athelstan which is thought to be hidden at her priory at Dartford. The crown is rumored to have extraordinary powers.

I enjoyed this different take on Tudor times. Having read as many novels as I have that have taken place Henry VIII’s reign it was a thrill to read one that gave me something new. Joanna is a delightful character – she tries so hard to be true to her vows but she is just so very human. She is constantly fighting what she sees as her bad qualities but we readers know they are what make her so lovable. She’s smart, she’s loyal and she cares. The history in the book is also different – instead of focusing on Henry it is more about the politics of the religion at the time. Because religion was power…

The mystery aspect of the book was exciting. Ms. Bilyeau drops little pieces here and there to keep things moving along but never too much to give it all away. I kept clicking the page turn button on my Nook at a fast pace to see what would happen next. There were just a couple of slow spots but the pace soon picked up again. A very good mystery indeed. The book ends with the hint of more adventures for Joanna and her friends. I will most definitely look forward to them, and so should you.