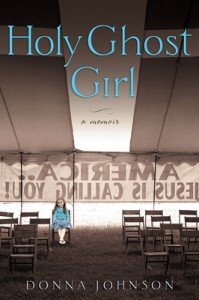 Donna Johnson’s remarkable story of being raised under the biggest gospel tent in the world, by David Terrell, one of the most famous evangelical ministers of the 1960s and 70s. Holy Ghost Girl is a compassionate, humorous exploration of faith, betrayal, and coming of age on the sawdust trail.
She was just three years old when her mother signed on as the organist of tent revivalist David Terrell, and before long, Donna Johnson was part of the hugely popular evangelical preacher’s inner circle. At seventeen, she left the ministry for good, with a trove of stranger- than-fiction memories. A homecoming like no other, Holy Ghost Girl brings to life miracles, exorcisms, and faceoffs with the Ku Klux Klan. And that’s just what went on under the tent.
As Terrell became known worldwide during the 1960s and ’70s, the caravan of broken-down cars and trucks that made up his ministry evolved into fleets of Mercedes and airplanes. The glories of the Word mixed with betrayals of the flesh and Donna’s mother bore Terrell’s children in one of the several secret households he maintained. Thousands of followers, dubbed “Terrellites” by the press, left their homes to await the end of the world in cultlike communities. Jesus didn’t show, but the IRS did, and the prophet/healer went to prison.
Recounted with deadpan observations and surreal detail, Holy Ghost Girl bypasses easy judgment to articulate a rich world in which the mystery of faith and human frailty share a surprising and humorous coexistence.


Donna M. Johnson has written about religion for The Dallas Morning News and other publications. She lives in Austin, Texas, with her husband, the poet and author Kirk Wilson.


This is a very open, honest tale of a woman’s childhood as she lived it with tent revivalist Brother David Terrell. Donna Johnson’s mother felt she was special; called by God. She joined Brother Terrell’s traveling church as an organist and soon became his “wife” despite Brother Terrell already being married. Brother Terrell must have taken some instruction from the Bigamist’s School on how to get a woman. Or two.


All snark aside this is an engrossing tale of what to me, was a frightfully neglected and sometimes abusive childhood. Ms. Johnson’s mother, in her thrall of Brother Terrell, would just leave her children with random strangers and go off with him to “do the Lord’s work.” The children would not know where she was, when she was coming back or even IF she was coming back. Praise God.


Brother Terrell himself is quite the character; any showman such as he would be but he does not come off in this telling as all good or all bad. He just is what he is and the memoir unfolds with a pretty unbiased eye all things considered. Ms. Johnson shares the ups and downs as her mother stayed with Brother Terrell through his poor days and his rich days until a final betrayal and his moving on to yet another “wife.”


The book is utterly fascinating and very hard to put down. In fact I read it in one sitting. The book is a revealing and honest look at a period of time in this country’s religious history that has died out and moved on to television evangelism. It’s one woman’s story of growing up and away from a very difficult childhood, rebelling and yet reconciling with the people that hurt her.


One lucky reader will win a copy of Holy Ghost Girl.
How do you win? It’s easy!
Just click “read more” and jump on the Rafflecopter.
If you are here by direct link the ‘copter is waiting!

Disclosure:  I received a copy of Holy Ghost Girl gratis from TLC Book Tours. Any opinions expressed are my honest opinions and were not impacted by my receipt of the free book. I received no monetary compensation for this post.