The Blood of the Fifth Knight by E.M. Powell – Book Review

I gave the first book in this series a 5 stars so I was excited to be offered the sequel, The Blood of the Fifth Knight by E.M. Powell at no charge for my honest review from Historical Fiction Virtual Book Tours. 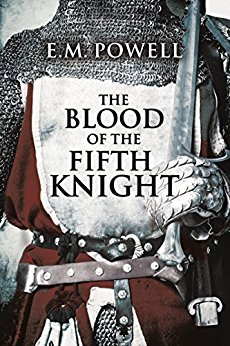 A triumphant sequel to Powell’s acclaimed historical thriller The Fifth Knight. A desperate king trusts a lone knight to unravel a web of murder.

England, 1176. King Henry II has imprisoned his rebellious Queen for her failed attempt to overthrow him. But with her conspirators still at large and a failed assassination attempt on his beautiful mistress, Rosamund Clifford, the King must take action to preserve his reign.

Desperate, Henry turns to the only man he trusts: a man whose skills have saved him once before. Sir Benedict Palmer answers the call, mistakenly believing that his family will remain safe while he attends to his King.

As Palmer races to secure his King’s throne, neither man senses the hand of a brilliant schemer, a mystery figure loyal to Henry’s traitorous Queen who will stop at nothing to see the King defeated.

The Blood of the Fifth Knight is an intricate medieval murder mystery and worthy sequel to E.M. Powell’s acclaimed historical thriller The Fifth Knight.

E.M. Powell is the author of medieval thriller THE FIFTH KNIGHT which was a #1 Amazon Bestseller. Born and raised in the Republic of Ireland into the family of Michael Collins (the legendary revolutionary and founder of the Irish Free State) she now lives in the north west of England with her husband and daughter and a Facebook-friendly dog. She is a member of the Historical Novel Society, International Thriller Writers and Romance Writers of America. She is a reviewer of fiction and non-fiction for the HNS. For more information, please visit E.M. Powell’s website and blog. You can also connect with her on Facebook, Twitter and Goodreads.

The Blood of the Fifth Knight brings back the heroes of the exciting first book, The Fifth Knight and starts with Henry II’s penance for the death of Thomas a Becket. As forces continue to want to destroy Henry he learns of a plot against his new favorite – Rosamund Clifford. His marriage to Eleanor of Aquitaine is less than happy and Henry is madly in love with fair Rosamund and wants Sir Benedict to find out who is trying to get to him through his mistress.  As he rushes off to do Henry’s bidding he leaves his wife, Theodosia alone with their two children. They will soon find that their peaceful life is going to end.

This period in English history is rich and full of possibilities for rich storytelling. Henry II and Eleanor were two very strong leaders with a long marriage full of passion in all of its definitions. Ms. Powell has taken one of the more famous (infamous) events in Henry’s reign – the killing of Thomas a Becket  – and turned it into a brilliant duo of books with compelling characters and strong plot lines.

I picked this book up and  I had the world’s hardest time putting it down. I found myself sucked into time and place and by now you know how much I love it when an author’s words have the power to do that. I found myself lost in Benedict and Theodosia’s world for better and often for worse. Reading this book will take you on a wild and crazy ride through Henry’s England and those who wanted to destroy him – his wife among them.

You can read my reviews of other books by E.M. Powell including The Fifth Knight, The Lord of Ireland and The King’s Justice.