This was my second book by Ruth Hull Chatlien and hopefully not my last. Blood Moon was sent to me by Historical Fiction Virtual Book Tours at no charge for my honest review. The book is based in reality and was a fascinating read. 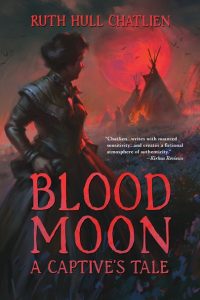 Southern Minnesota, August 1862. Smoke fills the horizon and blood soaks the prairie as the Sioux fight to drive white settlers from their ancestral homeland. Sarah Wakefield and her young son and baby daughter are fleeing for their lives when two warriors capture them. One is Hapa, who intends to murder them. The other is Chaska, an old acquaintance who promises to protect the family. Chaska shelters them in his mother’s tepee, but with emotions running so high among both Indians and whites, the danger only intensifies. As she struggles to protect herself and those she loves, Sarah is forced to choose between doing what others expect of her and following her own deep beliefs.

Ruth Hull Chatlien has been a writer and editor of educational materials for nearly thirty years, specializing in U.S. and world history. She is the author of Modern American Indian Leaders for middle-grade readers. Her award-winning first novel, The Ambitious Madame Bonaparte, portrays the tumultuous life of Elizabeth “Betsy” Patterson Bonaparte. Her latest novel, Blood Moon: A Captive’s Tale, is now available for pre-order.

She lives in northeastern Illinois with her husband, Michael, and a very pampered dog named Smokey. When she’s not writing, she can usually be found gardening, knitting, drawing, painting, or watching football.

I tend to read more Europe based historical fiction than US based but I am trying to change that. I find tales of the Western expansion of particular interest probably because of living in Montana. It was a difficult time for both the settlers and the Native Americans and I think the stories need to be told.

This book is based on true events; Sarah Wakefield lived with her husband and two children in Minnesota. Relations with the Sioux are breaking down in the years just ahead of the Civil War as the payments to them from the government are late and the Sioux are starving because they are no longer allowed to hunt on their ancestral lands. The soldiers at the Agency won’t release the trade goods without money despite it being a government facility.

As conditions deteriorate Sarah’s husband decides to send her to a more settled area but as she is traveling she and her escort are attacked. Her escort is killed and one of the two Indians wants to kill Sarah as well but the other remembers that she and her husband (a doctor) cared for the Sioux and did try and help them. This man, Chaksa takes Sarah and her two children under his care. So starts Sarah’s odyssey as a guest/hostage of the Sioux.

Ms. Hull Chatlien mentions in her author’s note that she kept pretty close to Sarah’s narrative in writing her fictional retelling. The narrative was incredibly fascinating and I can’t begin to imagine what it must have been like for Sarah to be in this situation with an infant and small child. The only thing keeping her from death was Chaksa and his mother. Many Indians wanted her dead just because she was white.

I found myself very involved in the story, almost as much as I was there. Ms. Hull Chatlien really brought the period to life for me. Sarah was, at times, not a very likable character. Nor was her husband. At times I felt very sorry for Sarah and what she had to endure and at other times I wanted to slap her for some of the things that she did. I guess that makes her a very well rounded character. Whether that is Ms. Hull Chatlien’s doing or the real Sarah was like that I don’t know. I’m very interested in reading the original diary now to see how it compares.

I’m keeping this book in hopes of finding the time to reread it. It is certainly a thrilling story with much going on. I do find fiction based on fact far more interesting than a fully made up tale. It is a difficult story to read for any number of reasons – the hate on both sides is very hard to experience. It is not very different from today but at least today there isn’t wholesale slaughter.

Other Books by Ruth Hull Chatlien:

During the Blog Tour we will be giving away 5 copies of Blood Moon: A Captive’s Tale and two $25 Amazon Gift Cards! To enter, please enter via the Gleam form below.

– Giveaway ends at 11:59pm EST on September 8th. You must be 18 or older to enter.
– Giveaway is open to residents in the US & Canada only.
– Only one entry per household.
– All giveaway entrants agree to be honest and not cheat the systems; any suspect of fraud is decided upon by blog/site owner and the sponsor, and entrants may be disqualified at our discretion.
– Winner has 48 hours to claim prize or new winner is chosen.